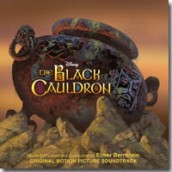 Even if Disney animation didn’t exactly get their answer to THE LORD OF THE RINGS with this 1985 fantasy spectacle, THE BLACK CAULDRON did brew up the last epic genre score that Elmer Bernstein would compose for a major studio. There’s certainly no mistaking his inimitable touch during the era, as CAULDRON‘s theremin-like Ondes Martenot, playful electronics and bold, brassy statements are part of the same, tasty brew from whence the likes of SATURN 3, SPACEHUNTER and HEAVY METAL sprang.

But if there’s one Bernstein score that THE BLACK CAULDRON really shares its lifeblood with, then it’s the over-the-top sound of GHOSTBUSTERS, as played for somewhat straighter ends here. Indeed, listening to much of THE BLACK CAULDRON‘s stormy evil orchestrations make one feel that they’re marching up the trumpeting steps of Spook Central to confront Gozer the Gozerean, let alone gaping at the presence of Slimer’s pokey synths. Not only do these thunderous qualities make CAULDRON a score that cult comedy’s fans shouldn’t miss, it also offers far more gonzo pleasures beyond it. While giving a tap of the choral and organ shield to the kind of sword and sorcery material he played straighter for Taarna, THE BLACK CAULDRON is more of a potpourri of Bernstein goodness, frothing over with rollicking western heroism worthy of John Wayne, imposingly soaring orchestrations to part the Red Sea by, incongruously jazzy bits and even a tango for good measure. It all coalesces into a thoroughly fun score that’s another supreme demonstration of how Bernstein’s youthful energy brought him a career rebirth in the 1980’s.

THE BLACK CAULDRON has been a rarity since that decade, with its 30-minute Varese CD worth its weight in gold. In another glorious example of Intrada getting in to mine the Disney vaults for all they’re worth, the label has expanded Bernstein’s score to 75 minutes on an unlimited edition, complete with a picture-filled booklet and Jeff Bond and Randy Thornton’s appreciative liner notes. It all makes for a Bernstein spell that’s as captivating as ever.

Click on Link: To Purchase the BLACK CAULDRON soundtrack