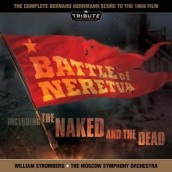 Though his gloriously grandiloquent music was best known for having homicidal maniacs menace innocent women, or throwing gigantic beats onto the breach with valiant sailors, one of Bernard Herrmann’s most impressive, if least recognized scores pitted Yugoslavian partisans against the Nazi war machine for 1968’s THE BATTLE OF NERETVA. Essentially self-exiled in England by the time he landed this Yugoslavian-produced, Hollywood-style tribute to their country’s war effort, the always-defiant Herrmann went out with an bang for this type of epic movie, providing a score of fearsome, patriotic power, its themes raging with the sound of courage and sacrifice, as well as lilting romance doomed to the motherland’s cause.

These stirring, emotional attributes make NERETVA an excellent choice as the next soundtrack to be restored, and re-performed by Tribute Records, whose conductor William Stromberg and producers John Morgan and Anna Bonn have given vital new life to such Herrmann masterworks as MYSTERIOUS ISLAND and FARENHEIT 451. This BATTLE marks another rousing success for this team, even if there might not be much love lost between Yugoslavia and Russia, which houses the Moscow Symphony Orchestra that’s brought new firepower to NERETVA.

But then again, blasting Germans is the one thing these countries can agree on, and the Muscovite players unite with a discernable passion in giving this soundtrack new, dynamic life that arguably improves on the original, but incomplete soundtrack on Southern Cross. It’s full of the stuff of a great “war” score, especially a Slavic-accented one. A valiant, hymn-like theme segues to brass-grinding villainy and full-step percussive marches, as well as an appearance by a wistful accordion. But what makes “Neretva” particularly notable in its genre is that it’s done the distinctly Herrmann way. In fact if you didn’t know that this was about WW2, you might assume its chilling string suspense and poetic tenderness was from a Hitchcock thriller, or perhaps that its fearsome, full-throttle brass combat might have accompanied one of Ray Harryhausen’s stop-motion monsters. THE BATTLE OF NERETVA serves as a feast of every iconic instrumental, and melodic trademark of the composer, given a twenty gun (and then some) orchestral salute that he’d likely approve of- even if the full scope of the film itself has never been properly released in this country.

As a bonus, Tribute also re-plays the WW2 music that Herrmann provided for the American soldiers of 1958’s THE NAKED AND THE DEAD, which sees musical action in the Pacific theater. Given its barbaric behavior by a Jap-hating sergeant, Herrmann piles on gnarled, angry grit for brass and percussion. Compared to NERETVA, NAKED  is positively grim, but no less impactful for a score that seethes with homicidal rage in a war that brings out the worst to begin with. There’s little valor in Herrmann’s approach, only the stark, seething fear and foreboding of men trying to survive against the enemy, all of which make for the composer at his darkest view of mankind, something the already-conflicted Herrmann did at his own professional peril to begin with.

Clink on the link to buy THE BATTLE OF NERETVA soundtrack