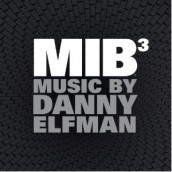 Danny Elfman loads up again with sunglasses and suit in style

Who ya gonna call when it’s time to bust some illegal aliens? The answer of course for team Tommy and Will is Danny Elfman, who dons his dark sunglasses and suit to hit the trail with the Men in Black in MEN IN BLACK 3 soundtrack. That proves to be a real charm the third time out for this time-travelling entry that gives a huge, rejuvenating boost to the franchise after an unholy second film (not that Elfman’s music has ever been worse for the wear).

Time travel’s the McGuffin that brings Agent J and K back to the 60’s to stop another alien plot to blast the Earth, a period that Elfman acknowledges with an acid rock electric guitar, while saluting the 1950’s retro bug-eyed monster premise with humorous use of the ooo-wee-ooo Theremin. But mostly, this score doesn’t fix what was never broken, relying once again on a great main theme to power through its frenetic action, along with the bongos of Will Smith’s unaging urban hipness.

Elfman is at his best when handling satirical genre pics like this, HELLBOY 2 and DARK SHADOWS, bringing on the glee of a kid playing cowboy in a room full on creature suits, an energy which reaches new, delirious heights here while never letting us forget the planet’s in truly dramatic peril. At once bewaring its alien rogues gallery while luxuriating in the choral magic of the nicer E.T.’s, Elfman also manages some truly touching flute and guitar emotion in the ties that bind J and K through the decades, a nice shot of character feeling that makes MIB3 human after all.

Click on Link: To Purchase the MEN IN BLACK 3 soundtrack