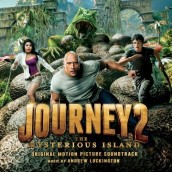 If you’re a teen heading off to explore a Vern-nian wonderland, a more powerful wingman to have at your side than even The Rock is composer Andrew Lockington. Truly burrowing onto the scene with 2008’s JOURNEY TO THE CENTER OF THE EARTH, Lockington impressed with his ability to conjure a wide-eyed sense of orchestral wonder for these kid-friendly re-jigs of their parent’s fantasy classics.

Now after a slightly more foreboding tour through THE CITY OF EMBER, Lockington returns to the series with JOURNEY 2: THE MYSTERIOUS ISLAND with his most impressive score yet. Just don’t expect any hints of life-imperiling darkness that Bernard Herrmann gave to the 1961 Ray Harryhausen stop-motion extravaganza, as this is the kind of CGI effects movie where no one really gets hurt (unless you count everything living on the Island at the climax). But that innocence is also a big reason for the immense charms of this child-friendly franchise, for which Lockington pours on as much musical suspense and spectacle as possible with his sweeping, thematically-powered orchestra- its STARGATE-like resonance powered once again by that score’s orchestrator Nicholas Dodd. Like its wide-eyed, enthusiastic young hero, Lockington just can’t wait to get to the next choral revelation of a lost city or giant bee, unabashedly pulling out the symphonic stops- and just as easily achieving emotional intimacy with a haunting female voice.

Adding to the exotic sense of musical discovery is drumming brought by Lockington from the Cook Islands and the wilds of Papua New Guinea. His enthusiasm comes together for a dynamite climax for electric percussion, a Carmina Burana chorus and full-throttle London players with a suspenseful last-second save by the Nautilus- easily one the action cues to beat this year. The series’ next journey to the Moon can’t come soon enough for Lockington’s exponentially growing ability at bringing classic literary wonders to cinematic life. Bonus points go to The Rock’s golden throat for his playful takedown on the most overused Hawaiian song of all time, as well as bringing a Las Vegas wink to its actual lyrics, complete with a big band