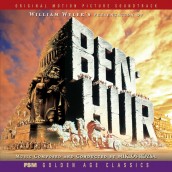 Miklos Rozsa's classic biblical score gets its holiest edition yet

If the granite-jawed manliness of Charlton Heston made him the anointed prince of Hollywood widescreen pictures with THE BIG COUNTRY, 55 DAYS AT PEKING and THE AGONY AND THE ECSTASY, then it was Miklos Rozsa’s ability to fill the screen with equally rapturous melody that turned him into epic court composer of KNIGHTS OF THE ROUND TABLE, KING OF KINGS and SODOM AND GOMORRAH. And while Heston and Rozsa would get in the Spanish saddle together for the mighty EL CID nothing would match the other teaming of these two larger-than-life talents like 1959’s BEN-HUR, the eleven Oscar-winning picture (including Best Actor and Score) that stands as the religious sword and sandal movie to rule them all. Having been transfigured from mere movie into the stuff of pop legend, Rozsa’s cosmically lush music has received several issues and re-performances through the decades since, nearly all of which are seemingly gathered for Film Score Monthly’s five-CD sermon on the soundtrack mount, which delivers pure old-school score bliss for over six hours to convert the unbeliever to the power of film music.

Along with his ROBE compatriot Alfred Newman, Rozsa’s dense orchestrations and beautiful themes hit all the beats of religious music, among them soaring choral hosannahs, transcendent strings and psalm-like melodies, all of which gave an uplifting sense of a greater purpose and reverence. It’s a sense of destiny that also drives this massive film’s story, which links the fall and redemption of Heston’s regal Jew with that of his legendary kinsman. It’s a succession of soaring, iconic themes that connote the power of worship, right down the chorus and organ that have the greatly moving resonance of a risen savior. But don’t forget that BEN-HUR is as much a historical action picture as it is tale of conversion, with Rozsa unleashing bold Roman marches, the cruel, swirling drama of a friendship gone wrong, and our hero’s brassy, Job-like punishment that will lead to the cinema’s most famous fanfare before he gets payback in the famed chariot race. While that unscored scene is an action highlight, then it’s musical equivalent is the throttling orchestral battle between Roman and pirate ships, a showpiece of relentless rhythmic builds and ebbs that make the listener feel like he’s chained to the massive rowing paddle along with Chuck, the music finally going to full ramming speed in a cue that still stands as one of the most thrillingly breathless, and wearying musical sequences ever written.

Every note that Rozsa wrote for BEN-HUR is here, and then some in this set that never proves tiring in spite of its hours of repetition. Collecting the original score onto the first two CD’s with better sound than ever before, FSM reserves the third platter for the “original” HUR soundtrack LP, an understandably thinner performance that ends up paling before the sonic presence of the two Kloss albums that hit record stores soon afterward, given the soundtracks immense popularity. Filling out the discs are well-assembled alternates, and unused Rosza cues. While the CD-sized case of this HUR might prevent it from having the physical polish of the Rhino set from 16 years ago (as well as its unbreakable binding), FSM’s release is a worthy last word on a score that illustrates the power of a film music like few others. As spiritually uplifting as it is exhilaratingly brawny, BEN-HUR‘s soundtrack will likely live on with the grace of the Prince that Rozsa’s work ultimately celebrates.