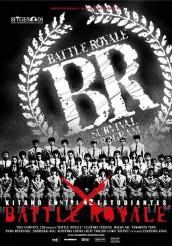 Breaking News: The CW talks about the status of BATTLE ROYALE as a TV series and THE SELECTION – TCA 2012

The 2000 Japanese movie BATTLE ROYALE has been discussed as a possible series to be developed for the CW, but at today’s 2012 TCA The CW Press Tour, The CW President Mark Pedowitz says they’re only in the discussion stages right now.

“It’s amazing what happens when you just have a phone call and a discussion,” says Pedowitz. “We’d love to do it. Hopefully we’ll be able to make a deal with the producers, and we’ll see where it goes. At this point in time it’s just a discussion for development.”

BATTLE ROYALE (about ninth graders fighting to the death in a future world) is similarly themed to THE SELECTION (girls enter a lottery competition to become the new Queen in a future world) that the CW was considering for this season in anticipation of piggy-backing on the success of THE HUNGER GAMES. The series didn’t make the cut this season and he says that series is also being redeveloped.

“The producers and writers have gone back and are re-scripting as we speak,” says Pedowitz. “We’re hopeful we will see something soon or make a determination whether to go forward. I’m a big believer in the show. I really wanted a show that had a GAME OF THRONES/HUNGER GAMES tone and we hope it’s THE SELECTION. If it’s not, then we will look at another arena and go to in terms of that. BATTLE ROYALE comes with a nice cult following, as we all know, and might be one of the predecessors of a lot of these things we see today.”

Article Source: Assignment X
Article: The CW talks about the status of BATTLE ROYALE and THE SELECTION as a TV series