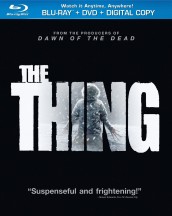 Blu-ray and DVD Picks of the Week Including THE THING

Also worth checking out: IN TIME, DREAM HOUSE, THE BIG YEAR, OUTRAGE: THE WAY OF THE YAKUZA, NIGHT TRAIN MURDERS and more 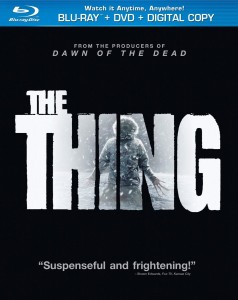 THE THING – I’m torn over the prequel to John Carpenter’s science fiction horror fiesta of the same name (which was a remake of the classic monster movie). On one hand, I really enjoy the nostalgia aspect with the film focusing on the Norwegian Antarctic camp that discovers buried under a glacier a spaceship containing a shapeshifting super-monster that absorbs the flesh of humans and assumes their form. On the other hand, it is quite different from the scenes we see in Carpenter’s vision that it somewhat taints what comes (in order of time) after it. I’m also not happy that the monster effects are all in CGI rather than the brilliant practical effects utilized in Carpenter’s classic.

That said, I am probably leaning more toward liking the movie because of the nostalgia and because we get more brutality in the form of this horrible creature that takes no prisoners and creates paranoia and über tension wherever it crops up.  Mary Elizabeth Winstead, who was horrible in SCOTT PILGRIM VS. THE WORLD (more because the film itself was horrible), redeems herself here as an American scientist ill-fated to investigate the finding in the ice and the only one to realize the real potential disaster ahead. While this doesn’t come anywhere close to the paranoia, tension-filled craziness of the first one, it has its moments and any fan of the original should enjoy it if they can get past the quirks I’ve already talked about. 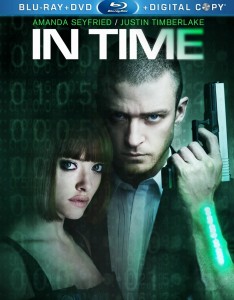 IN TIME – Justin Timberlake: action hero. Yeah, somehow it doesn’t roll off the tongue that well. But if Brian Bosworth can give it a shot, why not the former N-Sync singer, right? IN TIME is set in the future where there is no money any longer but instead time. Time that you live. You pay with time for the bus, tolls from moving from one city to the next, a beer, coffee – name it. Everything is paid for with the time you have before you die. Now the good news is once you reach the age of 25 you will never age past that date. The bad news is your clock begins to countdown and if you don’t work to get more time, you die in about a year. Because of this work for life motif, there is, of course, a social class structure – with those with only a bit of time living in ghettos and the rich with centuries of time, living in the high class, high brow areas. The plot then is around Timberlake’s character being gifted a century or so of time and then exploring how the rich have it – and, of course, running into trouble. Amanda Seyfried looks amazing in the film but Timberlake leaves a bit to be desired in terms of action heroes. Still, worth a Netflix option. 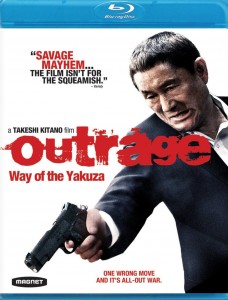 OUTRAGE: WAY OF THE YAKUZA – It is almost a must-watch whenever Takeshi Kitano is involved in something and OUTRAGE is no different. The actor/director (most famous from BATTLE ROYALE, or Japan’s early version of THE HUNGER GAMES) has a presence on camera that just makes for good TV watching. Several warring clans among the Yakuza are positioning for power against Mr. Chairman (leader of the Yakuza) by playing each other in fake alliances and money-making schemes. Mr. Chairman is all too happy to have these clans fight to the death as he is the head puppet master scheming alongside their own squabbles. The result is a brutal life and death struggle with members of each clan taking each other out and their own bosses in order to gain favor, all the while someone higher up is plotting to cut their legs out from under them. It is a fascinating and fun film where no one is safe and death is around every turn. 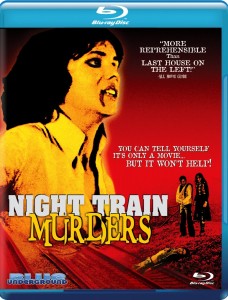 NIGHT TRAIN MURDERS – Billed as the sequel to THE LAST HOUSE ON THE LEFT (the original) and promoted under numerous names such as SECOND HOUSE ON THE LEFT, THE NEW HOUSE ON THE LEFT, LAST STOP ON THE NIGHT TRAIN and many others, NIGHT TRAIN MURDERS is probably the best suited name. It is among what would be a host of copycats to LAST HOUSE with the similar rape, murder and revenge plotline we would see carry in the late 70s, early 80s. But calling NIGHT TRAIN MURDERS a cheap knockoff is unkind – especially in this Blue Underground Blu-ray version – as it is not. The claustrophobic nature of the film in the first two-thirds sets it apart from other films that have tried to recapture the essence of LAST HOUSE. While the rape is mostly not shown, the implications are just as brutal if not more so because of the participants involved – one being an old man that’s lurking about. But the Blu-ray really shines in the remastering as it really is well done and brings an aged movie to the modern times in beautiful fashion. 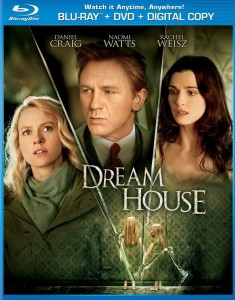 DREAM HOUSE – Unfortunately, the films that copy another genre goodness stops with NIGHT TRAIN MURDERS. DREAM HOUSE tries to get the viewer confused that the ideal life that a man, Daniel Craig, has with his hot wife, Rachel Weisz, and his two loving kids is just an illusion and that he actually murdered all three and is just psychotic and has some warped sense of reality. But it doesn’t work as it is a plotline we have seen before and seen better before. Not even the inclusion of Naomi Watts as the concerned neighbor helps. What we are left with is a muddled story where normal reactions to events are thrown out the window as we are forced to follow some lame supernatural plot. 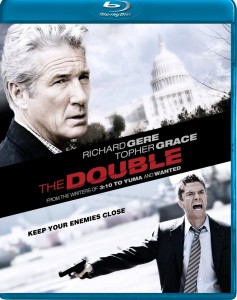 THE DOUBLE – On the trail of a murderous assassin named Cassius, two FBI agents follow the mounting body count of Russians living in the U.S. One agent, Ben (Topher Grace), has studied Cassius throughout his career and thinks he knows him like the back of his hand. The other agent Paul (Richard Gere) knows he doesn’t have a clue. Obviously, by the title, we ain’t talking about doppelgangers or clones but double agents and, I’ll decline to give anything away you probably already haven’t guessed by now. THE DOUBLE isn’t the best thriller or most creative to say the least (and luckily they don’t insult us very long before getting to the payoff early in the film). However, there are a few interesting twists as we learn more motivations behind the killings and why both agents are so hot to catch this Cassius. 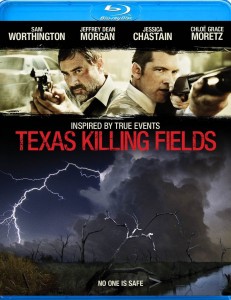 TEXAS KILLING FIELDS – In a distant part of the Texas landscape resides what they call the Killing Fields – a marsh-like area where no one dares go because it is believed haunted and where killers have been dumping bodies for a good deal of time. Two detectives in a small town – AVATAR’s Sam Worthington and Jeffrey Dean Morgan – get caught up in a game played by killers that start dumping ladies in the marsh and then calling the detectives using the victims’ cell phones. Soon, the killers begin hunting the detectives and when a local girl they are familiar with goes missing, they must race against the clock to save her and solve the brutal killings happening, putting their own lives at risk. TEXAS KILLING FIELDS won’t win any originality awards but it is well down and has a high production value with a story that is good enough to keep you interested. 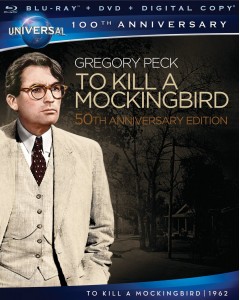 TO KILL A MOCKINGBIRD: 50TH ANNIVERSARY EDITION – Much like NIGHT TRAIN MURDERS, the Blu-ray remastering of TO KILL A MOCKINGBIRD is extremely impressive. While this is one of those titles that really does not need the high definition treatment in terms of content, when you see just how great it looks compared to older versions, you see why Universal decided to do it. Everything about the film is improved from the sound, to the picture quality to just how the film feels. It is like watching it again for the first time in some respects and the proper treatment for a classic.

Article Source: Assignment X
Article: Blu-ray and DVD Picks of the Week Including THE THING