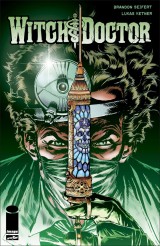 Robert Kirkman may have made a mainstream name for himself thanks to THE WALKING DEAD series on AMC, but he began and continues to thrive in the realm of comic books.

At WonderCon 2011 in San Franciso on Friday, Kirkman was promoting his newly-launched division of Image Comics, Skybound designed to develop the next generation of comic book talent.

The first original comic from the imprint is coming in June is WITCH DOCTOR from Brandon Seifert and Lukas Ketner.

Kirkman wanted the book because: “It is the smartest comic book I’ve ever read,” he says. “It is wholly original about a guy that fights supernatural threats with science.”

WITCH DOCTOR is a horror medical drama – described as HOUSE meets DOCTOR STRANGE revolving around a man searching for a vaccine for the apocalypse. Kirkman says everything we love about horror is in the comic along with this new twist of medicine and science.

Based on the pages that were shown during Kirkman’s panel, it looks damn good and I will probably check it out when it arrives.