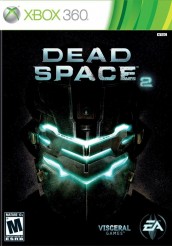 Holy crap this is one fun game, taking everything good about the original and making it better

There is something about horror-themed video games that make them stand out from the rest of the pack if done correctly.

DEAD SPACE 2 does it in spades.

The game is a sequel to the original DEAD SPACE released in October of 2008 focusing on the tribulations of engineer Isaac Clark after he arrives on a recon mission to find out why the USG Ishimura lost contact. What he finds is horror beyond belief as the inhabitants of the ship have been turned into stark raving crazy mutant creatures – some with huge claws and tusks for arms, some that fire projectiles, some that regenerate health and ginormous boss creatures that throw all sorts of nastiness your way. The best way to kill these creatures is severing their limbs from their body as that is not only their biggest threat but their biggest weakness. Why did this happen? Something called the Marker – a pillar of nastiness – turned them that way.

DEAD SPACE 2 takes this premise and catapults it to new levels with a host of new creatures, a whole new environment and the simple fact that Isaac Clark has gone made as a result of his terrible experiences from the first game.

Three years have passed since the events on board the Ishimura and Clark finds himself in a mental institution on the Sprawl, a densely populated space station on the moon of Titan, where he has been harvested for information about the Marker and been used – along with another crazy dude – to create a new Marker in order to use it as a military weapon. Well, you know that always goes bad and once again the population of the Sprawl are being turned into “Necromorphs,” or mutated dead humans now killing machines.

Clark must determine why this is happening and once again put a stop to it. But there’s a simple problem – he’s haunted by his dead ex-girlfriend that populates his mind and screams at him and whispers deadly nothings in his ear throughout the game. Along the way, Clark befriends Ellie, a survivor of the initial attack, and together they must find a way to not only escape the hordes of undead creatures but destroy this new Marker.

The thing that rocks about DEAD SPACE 2 is that not only did they improve the already great graphics from the first game but they offer so much more in terms of the environments you are given. Once again the vacuum of space and sections where gravity has been turned off once again provide some of the best moments in the game. You now can also travel in no gravity far easier than before with improvements to the suits provided and the tasks you have are so much more enjoyable than in the previous game.

Clark is also given a voice in DEAD SPACE 2 whereas before he was mostly mute with only grunts and painful yelps being the only time he would say anything. It definitely brings a more personal nature to the character and the game as a whole, especially with Nicole (his dead ex-girlfriend) talking in his ear constantly and berating him over the fact he let her die (which he didn’t but makes for great spooky fodder as do the unearthly visions of her throughout the game).

The gameplay follows the first to a tee, which isn’t a bad thing. You are in third person perspective and you are given a host of new weapons to use although the Plasma Cutter, assault rifle and flamethrower are still the best guns in the game.

But the most unique thing about DEAD SPACE 2 is its approach to including children in the fray. Whereas most horror-themed games (and movies for that matter) shy away from including any children or babies or anything in the game at risk of offending sensibilities, DEAD SPACE 2 thrives on it. There is a whole period where you must work your way through a day care and battle the hordes of toddlers and babies that have been turned into Necromorphs. Babies have been transformed into baby bombs that explode if you get near, toddlers run in packs and attack you from all angles with multiple creatures you must dispose of. Never have I ever played a game where one child attacks you let alone a host of them including babies that you have to kill otherwise you die.

Overall, DEAD SPACE 2 is a great freaking game. Holy crap is it fun. Just so much to do and so much replayability because you know you missed a thing or two the first time through. My only complaint is that it is too short. The game can be completed between 8 to 10 hours depending upon your competency. Yes, I want more. Much more, but that’s probably a testament to how good the game really is.