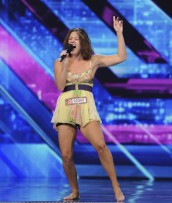 A step back from last week with manufactured drama, some odd choices going forward and the horrors of Nicole Scherzinger. 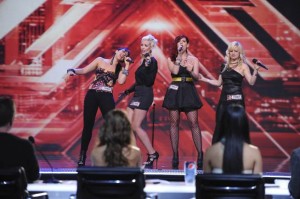 A quick recap of what you know about THE X FACTOR: Paula Abdul and Simon Cowell returned together, a pompous British dude with a Barney-colored Polo is the host, they kicked off Cheryl Cole as a judge despite the fact that she’s a better judge than Nicole Scherzinger, it has just as many freaks, losers and bad singers as AMERICAN IDOL and, yes, it is just another copy of all the other singing/talent shows we’ve grown to accept on TV over the years.

I won’t get into this any further, so instead I’ll just give my opinions as to the chances the people that were spotlighted have in making it deep into the show.

Makenna & Brock, students
Who are they: A duet that has been singing for four years. Brock secretly (or not so secretly now) loves Makenna.
Chances of making it deep: Decent, however, the cuteness factor and sappy story may not appeal with everyone and in fact cause people not to get behind them in the long run. I could give a rat’s ass about a budding romance on stage between two people that are not as jaded or corrupt as I am.

Skyelor Anderson, student
Who is he: Some Podunk from the backside of Mississippi who had the music cut out from under him during his audition.
Chances of making it deep: Not bad. He proved he is unflappable but just going forward with the audition. He’s got a decent voice and he has that Southern charm that seems unjaded from the rest of society. Still, shows like this love showing his story for a few episodes then just throwing him out with the bathwater as an afterthought.

J. Mark Inman, student
Who is he: He’s only in it for the money and did a very interesting rendition of Radiohead’s “Creep.”
Chances of making it deep: Weak. There’s no way in hell he makes it past the next stage.

Arin Ray
Who is he: We don’t know, we didn’t get a profile.
Chances of making it deep: Not bad. Based on the 10 seconds we got he sounded really good. Has a good look and is young so he might be what they are looking for.

Joshua Krajcik, burrito maker
Who is he: The dude that makes burrito and smells like onions and is a hard rocker but a momma’s boy.
Chances of making it deep: Release the Krajcik! I was telling myself this dude was awful the moment he appeared … yet, he can sing and make burritos. Damn, I’m impressed. He’s got a good voice and an interesting story and a nice mom, what’s not to like?

Drew Ryniewicz, student
Who is she: The Justin Bieber fanatic that wants to sing with him as her lifelong goal.
Chances of making it deep: Good. She took a song that was terrible and made it actually sound decent and has some skills as a singer despite only being 14. Pretty amazing. Oh and a great comment from Nicole “I liked the original version better… that’s a problem because I like your version better.” Wait, you just said you liked the original better …I’m confused.

4Shore, students and workers
Who are they: The group of friends that sang in high school and continued to sing after.
Chances of making it deep: Weak. Not only do they sound like a high school quartet, but they may get lost or outclassed by a single performer.

Elaine Gibbs, wedding singer
Who is she: The grandmother that also happens to sing at weddings.
Chances of making it deep: Weak. I know we only got a few seconds of her but it didn’t really impress with all of her screaming and nonsense.

Francesca Duncan, high school graduate
Who is she: Not quite sure other than a high schooler.
Chances of making it deep: Weak. I say this because not only did we get like 5 seconds with her but I could have sworn I saw two identical women that looked the same as she does.

Tiger Budbill, wedding DJ
Who is he: A weeding DJ … we didn’t get a back story.
Chances of making it deep: Weak. He can hold a note that’s for sure but he doesn’t have the look or the style to make it past the initial rounds.

Philip Lomax, part time waiter
Who is he: He’s a part time waiter from Seattle that sang Sinatra.
Chances of making it deep: If this was AMERICAN IDOL, Simon would have said get his clichéd old time shtick off the stage right now. Then lambast him about doing a song way too old for him. Here, he gives him a thumb up. Oh, how the mighty have fallen when it comes to forking over their own money.

Tina Tolliver, deli clerk
Who is she: The full of energy person that makes sandwiches for a living.
Chances of making it deep: Weak. She’s tone deaf. Yeah, she has energy but that’s it really, she still is a terrible singer. Plus, no one likes manufactured drama and that’s what this was … manufactured, fake drama that was pre-planned from the beginning in order to get people talking. Guess what, this is what makes people hate this show. Make it real or change the channel.