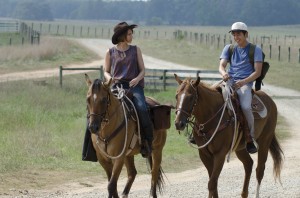 In the fourth episode of THE WALKING DEAD Season 2, “Cherokee Rose,” Hershel (Scott Wilson) sets boundaries for the refugees that have landed at his farm, Glenn (Steven Yeun) and Maggie (Lauren Cohan) head into town for medical supplies – including a special item for Lori (Sarah Wayne Callies) – and a water-logged zombie proves an interesting challenge.

Weaving in some plot elements that will surely be familiar to fans of the comic book series, the show follows up the shocking finale of episode three with another more character-driven episode that sadly ramps up the level of sheer stupidity exhibited by so many of the characters in the series. Nevertheless, there are still strong performances and key moments that make it worthwhile.

It’s nice to see the budding relationship between Glenn and Maggie as seen in the comic, with Maggie even speaking a line from the book, but their judgment is profoundly dumb. If you want to have sex, fine, but why strip naked spontaneously in town at an abandoned pharmacy with horses waiting outside and no conceivable way of protecting yourselves? Wait until you get back to the damn farm! Maggie, you may be an idiot, but Glenn, you know better.

There’s plenty of stupid to spread around. The idea of removing the zombie from the well is fundamentally flawed. They’re concerned about preserving that source of water on a farm with multiple wells – surely they can just write this one off? How is it worth the risk to even try to remove it, much less lower Glenn into the well and risk a healthy man’s life? In a show that has frequently succumbed to the horror genre’s cliché of otherwise smart people doing really stupid things, this has to be one of the worst things any of these characters have ever done. When the creature virtually tears apart in a gory explosion that provides this episode with its “gross out” moment, it only confirms how ridiculous the entire plan really was. In fact, it may be that the only reason for trying to remove the creature was to provide that gore quotient, which makes the writing a tad too convenient and transparent in its manipulation.

But we’re not done. Daryl’s (Norman Reedus) ongoing search for Sophia (Madison Lintz) also seems a bit excessive now. In the absence of any evidence that she still survives, the continuing commitment of an important, survival-trained individual from the group spending time risking his life for an uncertain goal is foolhardy. Granted, his determination may stem from some psychological need of his own, and that does give us some insight into the kind of man he is, but it doesn’t make it better.

Horror fans might have noticed the well sequence bore more than a little resemblance to similar scenes in EVIL DEAD II and ARMY OF DARKNESS, while Glenn’s comment about being desensitized to violence might be a meta-comment on the series itself. You can’t look to six degrees-style connections to redeem the episode, and fortunately the moronic plotting is counterbalanced by touches like Rick divesting himself of his sheriff’s uniform with a nod to the comics as Carl gets the hat, and Daryl with his story of the Cherokee Rose. If you didn’t love this reformed bigot already, now you have to. Oh, and who was that we just saw in the trailer for next week? Things might be about to get a whole lot more interesting.

Click on Link: TV Review – THE WALKING DEAD – Season 2 Premiere – “Save the Last One”