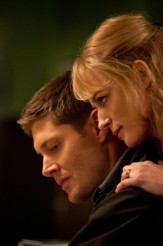 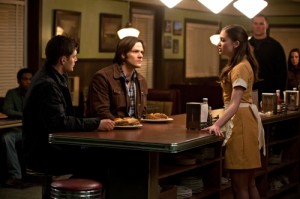 “Jefferson Starships … because they are horrible and hard to kill.” – Dean (Jensen Ackles) in SUPERNATURAL “Mommy Dearest”

Dean had some great one-liners in “Mommy Dearest” on SUPERNATURAL this week. One of my other favorites was when he found out Castiel (Misha Collins) didn’t have any powers he said “Without your powers, you’re like a baby in a trench coat.” Hilarious.

The Jefferson Starships line refers to Dean naming the hybrid creatures that Eve, the Mother of All, created that are half vampire/half wraith. Since they have never been in existence before, he got the chance to name them. Again, hilarious.

Sam (Jared Padalecki), Dean, Castiel and Bobby (Jim Beaver) get word that Eve is in a small town and because they are taking the battle to her instead of having it come to them. Of course, they are able to do this because they had the ashes of the Phoenix that they gathered in the previous episode, “Frontierland.” 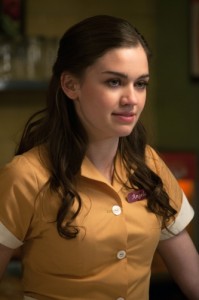 When they get to the town they not only find the Jefferson Starships, they find the head bitch herself who wants Crowley (Mark Sheppard), who has been testing humans to make the perfect creature. Eve tells the Winchesters that Crowley isn’t searching for Purgatory, but instead the new King of Hell is killing the creatures in order to garner souls that are powerful. Powerful souls that are able to help him gather a stronger army. But for what purpose?

Well, we find out at the end of this episode and we also find out why other angels within Castiel’s own group have been questioning Castiel’s moves. We find out that Castiel has not been kosher in his battle with Raphael in Heaven signing a deal to work with Crowley.

Finally, we now know the real motivations behind Crowley and the creatures and how both of these storylines are coming together. I guess it makes sense given that Crowley is ever the opportunist and working with someone in Heaven not only gives him more power but gives him opportunities to expand his own franchise.

What does this mean for the Winchester brothers and Bobby and their alliance with Castiel, who has been as much as part of the team this season as anyone? Obviously Bobby and Sam think that they are in cahoots already and given there are only three episodes left in the season, this will come out. But will the new and more vicious Castiel remain a friend or become the ultimate foe?

Oh and they killed Eve in this episode as well. Kind of a throwaway in the grand scheme of things and I understand why they did it because they need to advance the overall myth-arc of the season but it seems they should have killed her off in one episode alone given how much they have spent building her up. Although I did like that Dean planned ahead by drinking the Phoenix dust in anticipation that she would bite him. Very clever indeed.

I am excited about how they will end the season given SUPERNATURAL has been renewed for another season. Obviously this isn’t the end and we’ll see where they take us from here.