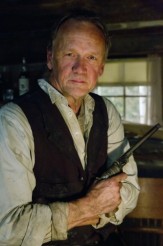 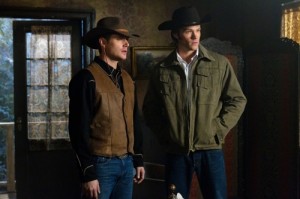 “You know what that is? Authenticity.” – Dean Winchester (Jensen Ackles) in SUPERNATURAL “Frontierland”

I guess it was only a matter of time before we got an Old West version of SUPERNATURAL.

Given we have had a monster movie episode, future timeline episodes, going into the ’70s and ’80s episodes and alternate universe episodes, the Old West was fair game.

“Frontierland” focuses on Sam (Jared Padalecki) and Dean (Jensen Ackles) trying to find a way to hurt or even defeat the Mother of All, who is gunning not only for the Winchesters but to take over the world. They read about a Phoenix being able to hurt the Mother but the only one they know of was in the journal of a Samuel Colt, a gunmaker in the Old West.

So they do what they think is best, they pull a STAR TREK IV: THE VOYAGE HOME and travel back in time in order to get their hands on the Phoenix. This is something that Dean has been waiting to do all his life (since he can quote every Clint Eastwood movie – especially the monkey ones). Yeah, this episode not only has a lot of flavor with the Old West but is heavy on the humor.

However, the Old West is anything but easy. There are demons and the Phoenix is actually a human that rises from the ashes and begins killing those in town that hanged him. The only way they can stop the Phoenix and gather its ashes and make it back to the future in time is to recruit Samuel Colt to help them – something easier said than done as he’s a retired, drunk hunter.

Needless to say, it works out in the end and it provides a highly enjoyable episode with Dean playing the ham he is so good at and the boys finally getting a weapon they can battle the Mother with.

Meanwhile, something is up with Castiel (Misha Collins) as he continues to make shady deals in his fight against Raphael over who will rule Heaven. What is Castiel doing? We don’t know. In a previous episode he used one of the other angels to stop the sinking of the Titanic in order to garner additional souls for his fight – something that had to be undone in order to appease Fate that was going about killing the decedents of the doomed ship, but what is he doing now? We don’t know, at least not yet. I assume we will get the answer in the final few episodes of the show as both this plotline and the Mother plotline wrap up.