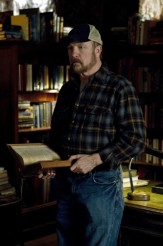 Preventing the Titanic from sinking saves us a terrible song, but creates a slew of problems for the Winchesters 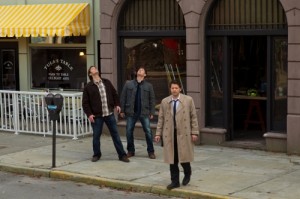 One of the things that cracks me up about SUPERNATURAL is that it either panders to its hardcore audience (mostly females) or loves to rub their face in the stuff they love.

This week in “My Heart Will Go On” it was the latter as the show took as many jabs at James Cameron’s TITANIC as possible including a nasty swipe at Celine Dion.

You’d think after the blockbuster events of the previous episode (“And Then There Were None”) before the winter break – that saw the deaths of Rufus (Steven Williams), Samuel (Mitch Pileggi) and Gwen (Jessica Heafey) – we’d have some sort of follow up or something. While at the beginning we did, this shied away from the whole Mother of All plotline that has heated up and focused on the other plotline of Castiel’s (Misha Collins) civil war happening in Heaven.

Balthazar (Sebastian Roche) goes back in time and prevents the Titanic from sinking. Initially, he tells Sam (Jared Padalecki) and Dean (Jensen Ackles) that the kooky angel did it because he hated the movie, but it turns out that it was more about Castiel trying to manufacture souls in order to have more fodder against his competition.

The trouble is Fate (Katie Walder) is righting this changing of history by eliminating the descendants of the ship, but Fate turns her eyes on the Winchester brothers after she learns they are in town because they stopped the apocalypse and rendered her obsolete, but also in order to flush out Castiel and get him to sink the ship again.

This unleashes a wave of paranoia among the brothers that is pretty comical as every person (or dog) they run up against may have a hand in ending their lives in a complicated FINAL DESTINATION way.

While this episode didn’t do much in terms of the Eve storyline and the endgame there, it did give us a bit more information about how desperate it is getting for Castiel in terms of his own battle with the other angels in Heaven. I’m not sure how this will factor into the other Mother of All storyline or if it will just be another facet of the remainder of Season 6 but with the show still on the fence if there will be a seventh season, you have to assume if there is no news about a new season they will wrap both storylines by the end.