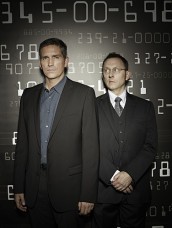 An interesting premise, enlivened by a strong cast

This isn’t (so far as we know) real, but it certainly sounds plausible – what if the government commissioned a tech genius to invent software that could isolate possible terrorist “chatter”? And what if that software included an element that was later discarded, which also picked up indications of non-terrorist crimes about to be committed?

So far, so good with writer Jonathan Nolan’s premise (he shares creator status with J.J. Abrams) for PERSON OF INTEREST, which then postulates that said tech genius, who likes to be called Mr. Finch (Michael Emerson), decides to take the fortune he’s made off his inventions and apply it to helping people. Specifically, Finch uses the money to enlist a homeless, despondent former CIA operative, John Reese (Jim Caviezel) to be the muscle in preventing the crimes predicted by the software the government doesn’t use, the part that predicts non-national security crimes.

The catch is that the software can indicate who is likely to be involved, but not the person’s name (it provides a social security number), let alone what the crime is or whether the person will be the victim or the perpetrator. Reese is reluctant to accept the gig both for understandable reasons (would you agree to this scheme right off the bat?) and for angsty hero motives (the past is too overwhelming for him to want to commit to the present), but he ultimately comes around, and once he does, he is very effective in both the detection and butt-kicking aspects of his task.

Admittedly, the crime in the first episode is on the pedestrian side, but given the complexity of the set-up, that’s probably best for audience comprehension. The possibilities here are many and tantalizing. Caviezel (of THE PASSION OF THE CHRIST fame) is credibly both tortured and dangerous. As for Emerson, who rightly won an Emmy for his work as Benjamin Linus on LOST, he brings a remarkable intensity and sincerity to Finch that holds our attention. Indeed, for LOST fans, Finch seems in some ways a continuation of where Ben was left at the end of that show – seeking to atone for terrible sins by doing practical good for others.

Taraji P. Henson so far doesn’t have much to do as the resident law enforcement character who is suspicious of Reese, but she does it with conviction and personality.

PERSON OF INTEREST is well-done, full of potential and, well, interesting. If it is not all that it may become yet, it’s still off to a solid start.