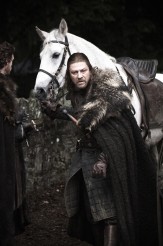 In “The Wolf and the Lion” episode off GAME OF THRONES, we don’t actually see any of the Dothraki, but we hear a lot about them, because King Robert (Mark Addy), having been informed that Daenerys Targaryen is pregnant by her husband, Dothraki warlord Khal Drogo, is sure the Dothraki will find a way to invade and put Daenerys’ brother (son of the king Robert replaced) on the Iron Throne. Young Arya Stark (Maisie Williams), dressed in boy’s clothing as she explores the castle at King’s Landing, overhears two strange men conspiring to kill her father Ned Stark (Sean Bean), the Hand of the King. Ned is having a bad day even by GAME standards.

Besides this news, he learns that his wife Catelyn (Michelle Fairley) has taken the king’s brother-in-law Tyrion Lannister (Peter Dinklage) prisoner, and before Ned can do anything about this, King Robert summons him and commands Ned to spearhead the assassination of the pregnant Daenerys. Ned refuses and resigns as Hand of the King. Before Ned can gather up his daughters and head back to his stronghold of Winterfell, he is cornered by Tyrion’s brother Jaime Lannister (Nicolaj Coster-Waldau), who has all of his men kill all of Ned’s men and enters single combat with Ned. It’s not clear who is going to win until one of Jaime’s men steps in and disables Ned (an interruption that angers Jaime so much that he knocks out his own man) – Jaime tells Ned he’d better get Tyrion back.

Catelyn, meanwhile, is having second thoughts about Tyrion’s villainy, especially when he helps save her life from bandits. Nevertheless, Catelyn brings Tyrion as a prisoner to her sister, who rules at the Aerie and seems to be a little crazed after the murder of her husband, who was the Hand of the King before Ned.

There’s a lot of good suspense in “The Wolf and the Lion,” as well as some fine action and great character moments, which are sometimes the same thing here – the fight between Ned and Jaime tells us a great deal about both men. There is also a horrific incident at a joust (again!), which demonstrates that the man known as the Mountain is one intensely poor loser, and Tyrion using what is at hand to save himself during attack is both awful and poignant (and as usual played wonderfully by Dinklage).

There almost a LION IN WINTER quality to a scene between King Robert and his royally unhappy Queen Cersei (Lena Headey), who discuss the complete failure of their marriage. There is also the intriguing matter of yet more eyes on the Iron Throne. It seems the king has a younger brother, who thinks the idea of succeeding Robert is absurd – but the younger brother’s male lover, a knight of some renown, thinks differently and presses his case during some intimate moments.

Along with the Dothraki, we don’t see the Wall this time around, and there’s one sex scene that seems thrown in really for the purpose of making sure the episode doesn’t go without – there is usually some sort of storytelling reason for it, but this one really feels like a placeholder – but there is so much going on, with such great character and narrative development, that the overall effect is still terrific.