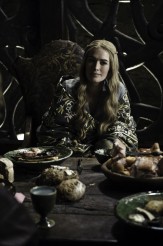 A nail-biting, devastating hour of drama

Beware, those who haven’t read George R.R. Martin’s first Westeros novel and have remained otherwise unspoiled – the end of the GAME OF THRONES episode “Baelor,” may cause you to sit down, stand up or otherwise move suddenly and involuntarily. Not that the rest of the episode slouches by either – with a few pauses for negotiation, it’s an exercise in great suspense, climaxing in a moment of terrible loss that indicates everything and everyone is up for grabs.

SPOILER ALERT BELOW … YOU’VE BEEN WARNED

In the Dothraki lands, Khal Drogo (Jason Momoa) is so ill from an infected wound that he falls from his horse. Jorah (Iain Glen), knowing Drogo’s wife Daenerys (Emilia Clarke) will lose all standing if Drogo dies (as will Jorah), suggests that they flee. Daenerys, however, is desperate to save her husband and summons a captured witch to save him, promising the woman her freedom if Drogo lives. The witch says she will use blood magic and kills Drogo’s horse, then sends everyone from the tent. Daenerys is hurt in a fracas, which causes her to go into labor, while unearthly sounds emerge from the tent.

At the Wall, Jon Snow (Kit Harington) learns that his father, Lord Eddard Stark (Sean Bean), is imprisoned at King’s Landing and that his half-brother Robb (Richard Madden) has raised an army to fight for his father’s release. Jon also learns that one of his commanders (Peter Vaughn) is the uncle of the slain “mad king” – and could have been king himself, but instead chose the life of the Night’s Watch. The commander counsels Jon to think long and hard about whether to stay or abandon his post to aid his family.

Tyrion Lannister (Peter Dinklage) is commanded by his father Tywin (Charles Dance) to be at the vanguard of the Lannister army. Tyrion regards this as a likely death sentence. He is accidentally knocked unconscious by one of his own men before the battle begins and misses the whole thing.

The Stark army sacrifices two thousand men on the field to make it easier for the remaining eighteen thousand to fight the Lannister forces later. One prize from the combat for the Starks is the capture of Jaime Lannister (Nicolaj Coster-Waldau), who Catelyn and Robb reckon will be useful as a hostage.

In King’s Landing, Ned does not care to bargain for his own life, but his older daughter Sansa (Sophie Turner) is in the hands of Queen Cersei (Lena Headey) and the queen’s son Joffrey (Jack Gleeson), now the king – Ned and Cersei know that Joffrey is actually Cersei’s son with her twin brother Jaime rather than the late king. Ned believes that Arya is also in danger, although in fact she is running loose in the city. Brought out to confess in public before the crowd, Ned sees Arya watching in the throng and Sansa at the queen’s side. Ned gives a false confession of treason to save his children. Cersei counsels Joffrey to mercy – but Joffrey condemns Ned to immediate death anyway and the executioner swings his sword.

And the audience goes, “!!!!!!!!!” Even if one suspected for meta reasons (like rumors, plus the fact that actor Bean was committed to another series) that Ned Stark wouldn’t survive until the end of GAME OF THRONES’ first season, the manner of his death hits very hard. He’s the character with the most integrity on view, and without him, the moral compass of the series feels as if it is spinning without a true north. Then again, if the infinitely complex character of Dinklage’s Tyrion had died, people might have punched out their viewing monitors. With television, at least, it may be easier to do without absolute integrity than without charm, surprise and wry perspective.

As for Daenerys, Clarke is showing both the character and herself as an actress as forces to be reckoned with – that story thread packs real suspense, as it seems that just about anything could happen. It’s hard to know what will happen with the Starks and the Lannisters, or who will emerge as the true center of the Stark family with Ned gone. It seems a safe bet that the appalling Joffrey won’t hold the throne for long, but who gets in next is anyone’s guess.

The entire enterprise is dazzling, sorrowing and splendid. This kind of television is why arced seasons exist.