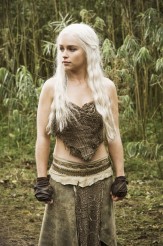 GAME OF THRONES opened hell for leather in its first week, and though its second episode, “The Kingsroad,” omits the horror element of the premiere, it is very compelling as straight drama with numerous interwoven threads.

It turns out that young Bran Stark (Isaac Hempstead-Wright) is comatose but not dead after his fall from a tower. This is bad news for Queen Cersei (Lena Headey) and her brother Jaime Lannister (Nicolaj Coster-Waldau), as Jaime pushed Bran out of a window, intending to kill the boy, when Bran saw the siblings having sex with one another. Bran’s father Lord Eddard “Ned” Stark (Sean Bean) has vowed to go back to the capital with King Robert Baratheon (Mark Addy).

On the road, Robert reacts badly to news that Daenerys Targaryen (Emilia Clarke), daughter of the slain king Robert replaced, has married warlord Khal Drogo (Jason Momoa). Drogo has enough warriors to overthrow Robert, but they’re all on the other side of the narrow sea. Ned counsels Robert not to worry about this. Meanwhile, Daenerys learns a few techniques to bond better with her spouse. Back at the Stark stronghold, Ned’s wife Lady Catelyn (Michelle Fairley) refuses to leave Bran’s side, and is therefore present when an assassin attempts to kill the unconscious child. The assailant is killed by Bran’s pet dire wolf. At this point, it’s obvious to Catelyn that someone is trying to kill her boy, and she believes the Lannisters are involved.

The remaining Lannister sibling, intellectual and fairly human dwarf Tyrion (Peter Dinklage) wants a look at the great northern Wall, so he travels with Ned’s illegitimate son Jon Snow (Kit Harington), who has decided to become part of the celibate, lifelong-dutiful Night’s Watch, who guard that part of the world. Before he leaves, Jon gives the gift of a sword to his young half-sister Arya (Maisie Williams), who secretly longs to be a soldier.

Arya’s older sister Sansa (Sophie Turner) is betrothed to Crown Prince Joffrey (Jack Gleeson). The young couple are flirting when they catch Arya practicing swordplay with a commoner. When Joffrey cuts Arya’s friend with his sword, Arya’s pet dire wolf attacks the prince, allowing both Arya and the other boy to escape. Arya chases her wolf away, knowing it will be killed. In front of the King, the Queen and Ned, Joffrey lies, Arya tells the truth and Sansa claims she can’t remember what happened. Since Arya’s wolf is nowhere to be found, Cersei and Joffrey insist that Sansa’s blameless pet wolf be killed. As Ned reluctantly does the deed, it is sensed by Bran’s pet wolf away in the north – and Bran wakes.

As in the first episode, there’s a huge amount to keep track of here, but since we’ve at least met most of the key players, we are better able to keep track of who is who and what their individual personalities are – to the great credit of both writers and cast, no two characters are alike.

The stuff with the children (even the engaged Joffrey and Sansa are very young) is startlingly intense and disturbing, with Joffrey showing his true colors as an incipient monster, Sansa being classically weak-willed and Arya a small but true heroine. Meanwhile, Dinklage’s Tyrion is fascinating. He seems to have a plan – damned if we can tell what it is yet, but Dinklage lets us see the wheels turning as the Queen’s less-loved brother contemplates his next move.

There’s also a mouthful of back history that we get here about the very complicated relationship between the current King, the Lannisters and the Taergaryens, but it is slipped easily into the dialogue and, like everything else, rendered easy to absorb. The entire enterprise feels like what it is – a rich novel thoughtfully and vigorously made into similarly engrossing television.