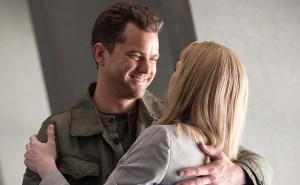 Don’t get me wrong. I love the character (and Jackson playing the role has grown on me) but just the fact that they would kill off one of the main characters on a show where there are so few main characters is a bold freaking move.

Now, I highly doubt this is gonna happen. Think of the time and the storylines that we have invested in Peter through the course of three seasons. All of that would be for naught. Unless Jackson has some new series or a budding film career going, I just wouldn’t think it would be something they would do. Plus, the fans would be pissed. Well, as a fan of the show, not just a reviewer, I am not pissed, I’m excited about what is to come next.

“The Day We Died” was a fitting finale because it focused on Peter. Fitting because Season 3 has been pretty much all about him. From his double relationships with Olivia (Anna Torv) and Faux-livia, to his connection to the machine, to his relationship with his Walter (John Noble) and Walter-nate, the entire season centered on Peter.

That’s why the fact that he simply fades out of existence in the final moments of the Season 3 finale is outrageous and freaking awesome at the same time. Because literally anything could happen at this point, and for this show that’s a fun prospect.

While this was a stunning, up until that point we had gotten a very comic book X-MEN “Days of Future Past” vision of 15 years in the future after Peter entered the machine, destroyed the other universe and now dealing with the repercussions of this event. Not only are Peter and Olivia married (and Olivia with full control of her telekinesis), Astrid (Jasika Nicole) is part of the FRINGE division, Broyles (Lance Reddick) is a U.S. Senator and Walter has been in prison for a number of years for doing something horrible and dangerous, but we weren’t really made aware of what he actually did.

But in his last few moments “over there”, Walter-nate somehow crossed over to our universe and now actively seeks our world’s destruction in order to make Peter suffer. He goes as far as to shoot future Olivia in the head in order to cause this suffering in one of the series’ most unexpected and brutal moments.

Of course, this was erased after Walter determined that he knew a way that Peter could save both universes and save Olivia as well. If Peter was to travel back in time to the point where he first entered the machine (or the point where the penultimate episode of Season 3 ended). Walter knew how to get Peter to travel through time because it was he – not the First People – would actually made the machine and then broke it up into various parts and scattered it across time using a wormhole that now threatened all life on our planet.

It was also determined that one universe could not exist without the other and that was the main reason our world was still falling apart despite the fact “over there” had been destroyed 15 years ago. So, Peter did the thing that he had to. Bring both Fringe divisions together in one room – a bridge between universes – so that they could begin to work on solving their problems rather than create bigger ones. It was then that Peter faded into existence with the other members of both sides not having a clue of his ever being alive.

This was confirmed by a host of Observers gathered on Liberty Island with one saying to another “You were right, they don’t remember Peter.” And the other rebutting, “How could they? He never existed. He served his purpose.”

Setting the stage, for an interesting Season 4 indeed. What the heck happened to Peter? Is he really gone? How could they forget about him given how much he was instrumental in everything that happened? There must be some legacy evidence of his existence, right? And what is the end game of the Observers if there is one? We have never known and they continue to be the biggest mystery in the series. So many other questions: Will the alternate universes work together solving science events? Or will they compete? Can the Walters get along? Can the Olivias? Can’t wait to find out.