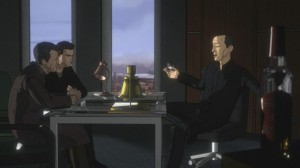 This was certainly an interesting episode of FRINGE.

A tripping Peter (Joshua Jackson), a tripping Broyles (Lance Reddick), cartoons, the Twin Towers, a dead fat guy doing a dance in a tub of ice, zombies, animated birds flying and bubbles were just some of the highlights.

Yeah, the comedy was fast and furious, but it did the job in progressing the whole William Bell trapped in Olivia’s (Anna Torv) body. I was wondering how they would extract Bell’s consciousness from Olivia and still give the opportunity for him to come back as a character on the show in some fashion. Also, the show needed to end this plotline in order to get back to the main thrust of the Season 3, which is the budding war between the universes, the role of the death machine and Peter’s choice between “over here” Olivia who he loves and the “over there” Olivia who gave birth to his baby as shown in the previous episode.

While I liked the whole different aspect of the episode and it was pretty unique for the series that has been pretty wacky from the get-go (granted this was really wacky), I really liked that Bell and Peter got some time together as we have never really seen the two of them together – even if it was in animated form. I also liked the whole trick that Olivia played on Peter in order to find out if it was really him. Very clever and something that indeed a scared Olivia would do considering the circumstances.

It also gave us another growth period for Olivia in showing that she is a stronger, better person than the scared little girl that she has been battling with all her life – one that is not afraid of the future and one that may be crucial in the upcoming battle ahead.

That leaves us with a slew of questions for the last few episodes of the season: What are the plans and motivations of the Observers? Just what does the machine do and how will it be powered by Peter? What happens when Peter learns that he has a baby on the other side? Will we see any of the alternate universe be around in season four now that we know a season four is going to happen? Who is the man with the X on his shirt and why is he going to kill Olivia? Maybe more importantly, why is she so matter a fact about it?