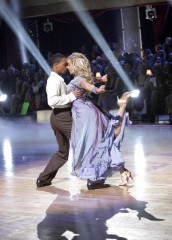 It’s Guilty Pleasure Night for DANCING WITH THE STARS’ week six of competition for Season 12. Even with Karina Smirnoff taking over with the Kirstie Alley slip up curse – she tripped over partner Ralph Macchio’s coat – the dancing duos are all still in a very tight race, separated by one point all the way down the leader board.

Chris Jericho, however, found himself two points from Macchio and in last place with a respectable 22. And, yes, that means Kendra Wilkinson is NOT in last place! In her best dance to date she scored an impressive 25. Also impressive was a resurgence from the 1990’s group Hanson who seem to have gotten better with age, or did they voices just finally change? Either way, they sang throughout the night little guilty pleasures, including their own guilty pleasure “MMMBop.”

Chelsea Kane (Disney Channel Star) and her partner Mark Ballas
She is always fun, fun, fun! There is no question of that. Len Goodman liked Kane’s high energy, but especially liked her control throughout the Quickstep. Bruno Tonioli thought she had a lot of zest! Carrie Ann Inaba was in very good spirits deeming the couple “magical”.
Scores: Inaba – 10, Goodman – 9, Tonioli – 9, Harland – 9

Hines Ward (Football Star) and his partner Kym Johnson
He is smooooooooth. He is sexxxxxy! Need I saw more? Goodman was impressed, yet again, saying every dance Ward does is great. Tonioli thought Ward’s Viennese Waltz was pure pleasure. Inaba, too, was not disappointed.
Scores: Inaba – 9, Goodman – 9, Tonioli – 9, Harland – 9

Romeo (rapper/actor) and his partner Chelsie Hightower
He did it! Romeo received the very first ten of the season from Inaba, not to say Goodman and Tonioli were disappointed, they weren’t. And rightly so, Romeo’s Waltz was so sweet and so romantic, just beautiful!
Scores: Inaba – 10, Goodman – 9, Tonioli – 9, Harland –9

Kendra Wilkinson (Reality TV Star) and her partner Louis van Amstel
She has the jiggle to get through the Samba, but some of her shaking was brought with trepidation. For a girl who showed it all to America it’s surprising to see her be so timid to, well, show it all to America. Tonioli proclaimed Wilkinson’s dance the revenge of the stripper – enough with the stripper analogies Bruno! Inaba thought her dance was perfect for Guilty Pleasure night. Goodman was very pleased on his birthday saying the more she gyrated the more he palpitated. Easy guys!
Scores: Inaba – 8, Goodman – 8, Tonioli – 9, Harland – 8

Ralph Macchio (Actor) and his partner Karina Smirnoff
OMG! When is Macchio going to get a break! It was supposed to be his comeback dance…again…and instead Smirnoff took a tumble over his very long coat and there went the comeback. However, Macchio got right back up on the horse and was applauded by the judges for doing so. Tonioli said he still felt the fire. Inaba was amazed at how quickly they got back up and put the rest of the dance to shame. Goodman, became very fatherly, telling Macchio he was proud of him.
Scores: Inaba – 8, Goodman – 8, Tonioli – 8, Harland – 8

Chris Jericho (Wrestler) and his partner Cheryl Burke
Right from the get go you could tell Jericho was too overly focused on the steps and forgot about the entertainment part of the Tango. The judges saw it as well. Tonioli told Jericho that tonight it really didn’t happen for you. Goodman thought the dance lacked a bit of intensity. Inaba summarized the dance in its totality as the pressure just getting to him.
Scores: Inaba – 7, Goodman – 8, Tonioli – 7, Harland – 7

Kirstie Alley (Actress) and her partner Maksim Chmerkovskiy
At first it was all for fun. Now, Alley is in it to win it! She is very serious about the competition and it shows. She stepped it up and handed over the “oops I slipped up” curse to Macchio and Smirnoff, who hopefully will hand it over to someone else next week. Goodman told Alley that she did a great job and Tonioli asked her to hit me baby one more time (a play off of the Britney Spears song they danced their Samba too). Inaba was straight up saying this is the way I wanna see you dance!
Scores: Inaba – 8, Goodman – 9, Tonioli – 9, Harland – 8

Who’s going home? Well, once again it’s a tough call. However, if Macchio has the fan base he seems to have, it will all come down to either Jericho or Wilkinson hitting the pavement.

Who Has Legs To Take Home The Mirror Ball? Once again the seven stars are separated by just one point between them…the seven scores are 28, 28, 27, 26, 25, 24 and Jericho with 22. Who’s the front runner? Well, this week that would be Romeo and Kane but who knows next week! Stay tuned!