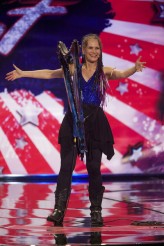 The second episode goes to Seattle in search of talent! 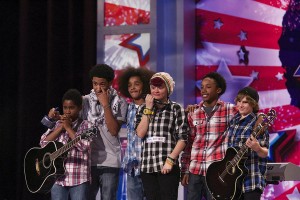 AMERICA’S GOT TALENT went to the Pacific Northwest – Seattle – to look for talent and got plenty of it and more! The “more” meaning less in this case. Host Nick Cannon stirred up the audience while hosts Piers Morgan – who takes his job very, very seriously, Sharon Osbourne and Howie Mandel – who barely takes notice that he has a job to do, arrive with Hollywood gusto.

The AGT show is really about the three of them. Mandel is the goofball who makes light of everything except if you touch him, then he gets a cold stare in his eyes – nothing funny about that. Osbourne is, believe it or not, the everyday (wo)man who goes along with what the live audience wants and probably what most of America likes. And then there’s Morgan who couldn’t be more uptight and pompous if you paid him a million dollars…more. He comes straight from the Simon Cowell “school of arrogance”.

So, to like the show, you have to like the dynamic of these personalities, regardless of the rubbish or brilliance put forth in front of them. Sometimes, it’s too much. Other times it works. In between the Morgan, Mandel and Osbourne Show some slightly talented and some very talented people appear. Some completely untalented people make their way up on stage as well and Morgan is the first to buzz them right off the stage. Unfortunately for him, Mandel loves it when Morgan hates something and he almost never buzzes an act that Morgan buzzes which drives Morgan bonkers. It can be amusing but then, because Mandel refuses to buzz off the act, we have to sit and actually watch the act. Not fun!

At any rate, tonight’s show brought a wonderful comedienne/impressionist who nailed Miley Cyrus’s tone and Kathy Griffin’s voice to a tee! She is moving onto Vegas, as are two acrobatic acts – one from Kenya, a hip-hop break dance group, and an 8-year old singer.

Two acts were disagreed upon between, you guessed it, Mandel and Morgan. One was a group called Pop Lyfe that had about six members but only one singer. Morgan insisted that if she included the group he would have to say no, but if she would be willing to go it alone to Vegas then he would say yes. She refused to go without her “brothers”. No matter, Mandel and Osbourne pushed them through to Morgan’s dismay. Also in disagreement was a Costa Rican showman who wiggled and jiggled in his stain shirt while barely singing La Vida Loca. Morgan was definitive with his no, even buzzing him within ten seconds of him performing. Mandel loved the cheeky and cheesy part of Mauricio Herrera’s act and convinced Osbourne of its cleverness, which finally got a yes from her.

At one point Morgan walked off after buzzing the Paper Horn Man – another act in contention – because he just couldn’t take it any more. Morgan had to be wrangled back into his chair to cast a vote of no and this time Mandel could not convince Osbourne to side with him. So no to the Paper Horn Man.

So, is the Morgan/Mandel bickering an act as well? Maybe, maybe not. After the show Morgan storms off with Mandel in tow. Morgan explains to him that if you keep letting these underqualified acts go through it will be the stupidest finals show ever. True, but is the show really about the people up on stage or is it about the already highly paid judges doing their schtick from the audience? Stay tuned.