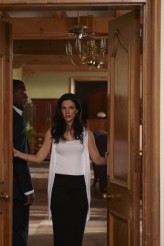 A religious cult, ALPHAS style, with intriguing ramifications for Rosen, and a B story that allows Rachel to grow in a natural way 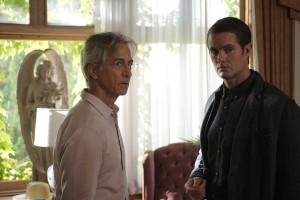 Given the premise of ALPHAS, it’s a natural fit that the show would explore someone using an Alpha ability to start a cult. ALPHAS being ALPHAS, the cult leader is no false prophet but rather a man of sincere belief, and “A Short Time in Paradise” raises some intriguing issues, albeit it tends to come down strongly on a particular side.

A lot of the team members are going through transitions large and small. Nina (Laura Mennell) is giving away items she obtained via “pushing” their original owners. Rachel (Azita Ghanizada) is afraid of what will happen if she shows up at her sister’s engagement party without a date. Ex-FBI agent Bill (Malik Yoba) wants Rosen (David Strathairn) to start reading tactical manuals, much to Rosen’s horror – Rosen is proud of the fact that he’s never fired a gun in his life. Cameron (Warren Christie) is devastated by the news that his ex-wife is moving out of state with their son, a situation that sends him to an AA meeting.

At the meeting, non-alcoholic Jonas (Garret Dillahunt) speaks up and says he can help everyone there. An angelic glow spreads from Jonas. The next morning, an uncharacteristically happen Cameron shows up in Nina’s bedroom, inviting her to come meet Jonas.

Jonas lives in a beautiful mansion, surrounded by happy worshipful people. When Nina pushes Jonas (both literally and figuratively) for an explanation as to what’s going on her, Jonas glows. Soon Nina and Cameron are off alone with one another, making love under the trees, while one of Jonas’ followers has a seizure in the garden.

Cameron persuades Jonas to call Rosen for help. When Jonas shows Rosen a roomful of catatonic people, some of them dying, Rosen realizes that Jonas’ Alpha ability is to stimulate people’s pineal gland, giving them a sense of euphoria and human connection – a state that can lead to paralyzing encephalitis. Jonas thinks he has a divine gift that shows everyone true meaning; his great sorrow is that he cannot experience it himself. When Rosen sees that he cannot persuade Jonas that he has an Alpha (rather than a spiritual) condition, and finds that he is not allowed to leave or call for help, he does devise a medical cure for the afflicted. Rosen’s first success comes out of his frozen state cured of both paralysis and joy.

Rachel takes Gary (Ryan Cartwright) to her sister’s engagement party, but it quickly goes wrong when Rachel detects that her father, Mr. Pirzad (Daniel Kash), is seriously ill. Mr. Pirzad refuses to listen and Rachel leaves in disgrace. Gary insists that Rachel keep talking to her father until he listens, and Rachel realizes Gary is right. She shows up at her dad’s dry cleaning store and tells him that he has cancer – and if he doesn’t go to the doctor immediately, she’ll tell Mother.

Bill, Rachel and Gary realize that the others are missing and track them to Jonas’ estate. Bill brings his gun and tells the others to contact a Department of Defense tactical team if he isn’t out soon. Bill brings his gun, but Rachel pushes him to surrender it and Bill is soon under Jonas’ sway. A dazed Bill tells Jonas about the DOD team heading their way and Jonas decides that the only thing to do is burn everyone, including himself and Rosen, to prevent them from being plunged back into darkness. Rosen finds the medication he can use to bring everyone out of their euphoric states – along with Bill’s gun, stashed in Jonas’ desk. Rosen injects the cure into a number of people, but when Jonas refuses to head Rosen’s pleas to let everyone go (most are still entranced, happily ready to burn to death), Rosen shoots the evangelist dead. The DoD team rescues everyone, though the house goes up in flames, and the spell is broken.

Rachel’s dad has State One throat cancer – he tells Rachel that it’s easily treatable because it was caught so early, thanks to his miraculous daughter. And now will she examine her aunt?

Rosen is in shock over having killed a man; Bill urges him to see it as killing a bad guy to save a lot of lives.

There is genuine philosophical heft to the Rosen/Jonas conflict in “A Short Time in Paradise.” It’s a question that is grappled with in life and in art frequently – is it better to live briefly and ecstatically, or at greater length with less joy? What tips the equation here (and often elsewhere) is that the ecstasy comes at the expense of others, but the issue is given its due. Strathairn is as usual the epitome of rational humanism, and guest star Dillahunt can play unadorned conviction with the best of them. It’s a powerful match-up of actors and characters.

The visual depiction of Jonas’ power is very effective, giving us an approximation of what his followers feel. It makes for a much stronger episode that those Jonas affects are not drained of their personalities, but simply relieved of the doubts that hold them back. Despite what causes it, the joining of Nina and Cameron is shown to be unambiguously good – and of course a source of embarrassment and confusion once the characters are back to their “normal” selves.

The interaction between Gary and Rachel where it slowly dawns on Rachel that Gary is giving her sound advice is smart and warm without being overpowering, and there’s a sense of gratification in seeing Rachel’s father embrace his daughter’s gifts.

“A Short Time in Paradise,” like most ALPHAS episodes thus far, works on many levels. It is intelligent, has heart without sacrificing action, and is very satisfying.