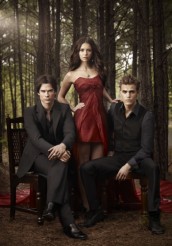 TCA 2011: The scoop on THE VAMPIRE DIARIES (Hint – Klaus is coming)

While speaking at today’s Winter TCA session, THE VAMPIRE DIARIES actress Nina Dobrev hinted that Klaus will be seen on the show.

“He’s coming at some point at the end of the season,” says Dobrev. “He hasn’t been cast yet, but he’s going to be a Big Bad Vampire.”

Candice Accola, who also stars on DIARIES, also notes that werewolves will be playing a big part in the latter part of the season.

“We’re introduced to more werewolf action,” says Accola. “We show the meeting of vampires and werewolves and how they will be part of each others lives. It’s going to be a battle for territories and how that affects personal relationships with friends within the town. Stay tuned.”

CAN’T WAIT FOR THE REST OF THE SEASON? COMMENT BELOW ON WHAT YOU WANT TO SEE HAPPEN ON VAMPIRE DIARIES THIS YEAR