Home » TCA 2011: RETIRED AT 35 brings back the old-fashioned sitcom (with a modern twist) 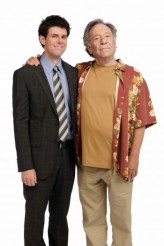 TCA 2011: RETIRED AT 35 brings back the old-fashioned sitcom (with a modern twist)

Today’s TCA press tour event kicked off today with TV Land bringing out their latest sitcom RETIRED AT 35 which debuts on January 19th.

Hot on the heels of the success of HOT IN CLEVELAND, RETIRED AT 35 is a sitcom about a 35 year old (Johnathan McClain) who quits his job and moves in with his parents (George Segal, Jessica Walter) in Florida. Of course, he’s arrived just as his parents are breaking up. The show is also shot in the multi-camera format that many networks have since abandoned for the single camera.

“People miss this form,” says executive producer and creator Chris Case. “People have walked away from it wholesale, except for CBS. These shows are familiar to people, but we’re writing it from a very contemporary feel. We have all sorts of contemporary issues going on. How do you have a fresh start? I feel this form is fantastic and done well, people tune in and watch it. It is compelling for people if it’s done well. People are hungry for this. HOT IN CLEVELAND has proved this and we hope to prove it with this.

For Segal and Walters, they’ve been having a blast with the great writing on the show.

“With the decline of the sitcom [on the networks], it’s freed up all these showrunners, so the quality of writing is breathtakingly high,” says Segal.