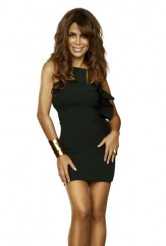 “It’s nice to be back in a demented relationship,” says Abdul.

“It’s like the EXORCIST 2,” adds Cowell dead-pan (and via satellite).

“It’s like mommy and daddy had a trial separation, but they still argue all the time,” says Jones.”

As for how different THE X FACTOR will be different from IDOL, Abdul says “the show is “completely different.”

“It’s a very grand scale and has an epic feeling,” says Abdul. I’ve never witnessesed so much talent in each of the four categories. There are stars that will emerge. And the whole next step of mentoring is going to be extremely intense. It’s something I have a tremendous love for since I started my career behind the scene as a choreographer so it’s great working and mentoring new talent.”