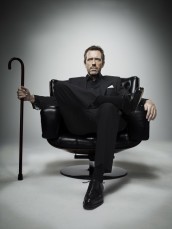 With HOUSE returning for Season 8 with a leaner cast this fall, and a long negotiation process that delayed the announcement it would be returning, the question mark of whether the show will return for a Season 9 was in the air at today’s Summer 2011 Television Critics Association session for Fox.

Fox Entertainment President Kevin Reilly says he still has no word if this will be the show’s final season.

“I can’t confirm it’s the last season,” says Reilly. “Hugh [Laurie] is mulling it. The producers are. This is the original team of creators who have been there from the get-go and have kept the quality so strong. I don’t want to put words in their mouth, but they do want to go out strong, so we’re going to revisit this in the fall and decide if it’s the last year on Fox or not.”

Of course, even if it ended on Fox, Reilly says NBC Universal which produces the show, could decide to keep it going and shop it around elsewhere to other networks, but as far as it remaining on Fox, he says that decision is a few months off.

“Everyone wants it to stay creatively vibrant and not limp along for another four years as a vestige of what it was, so we’ll make that decision later in the fall,” Reilly adds.

Article Source: Assignment X
Article: Fox is still undecided if Season 8 will be the Final Season for HOUSE on Fox