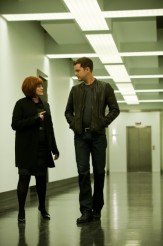 If the fans show up, Fox's Entertainment President says the show can go on for "many years"

Much has been said about the move of FRINGE to Friday nights on Fox, but at today’s Winter TCA press tour in Pasadena, CA,  Fox Entertainment President Kevin Reilly says, “I beg you to not write the eulogy.”

“It’s a show we’re passionate about,” says Reilly. “It’s a show we’re passionate about. Friday is a troubled night. Contrary to performance we had on that night, it’s not a free night for us. We’re continually looking for the solution to the night. We were happy to see it show up on a number of top ten lists. It’s like a mini-movie every week. The production value is incredible. We were in a four-way scripted race on Thursday. No other time period has had that. It put us in business on Thursday nights. I really hope fans stick with it, even if DVR usage goes up a little more. It’s a fantastic show. I would be heartbroken if it went away.”

In terms of ratings, Reilly says the show just needs to retain its Thursday night viewers on Friday nights to make them happy.

“If we literally transfer the ratings [from Thursday] in that ballpark on Friday [we’d be happy],” adds Reilly who says it’s a difficult show to join in progress, which makes since to have it on Fridays. “We’re playing to our fans. So if fans stick with us, it can stay on the air for many years.”