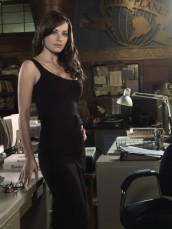 TCA 2011: (Update) Erica Durance talks about the end of SMALLVILLE

While speaking at today’s CBS Winter TCA press day in Pasadena, CA, Erica Durance spoke about working on SMALLVILLE this season, when she knows it’s the end. This is what she had to say …

“It’s pretty bittersweet,” says Durance who plays Lois Lane. “There’s so much work to do, to look forward to the end, you miss doing justice to the scenes you’re working on. You want to do justice, but there are moments you think, ‘My god, this is the last time I’m going to work with you?’ And I remember doing a scene with Allison Mack and [thinking that]. You learn to appreciate every scene you’re going to do and appreciate working on a show where everyone cares about each other.”

As for how Lois will be changing now that she and Clark (Tom Welling) are engaged, she says there will be a shift in the latter part of the season.

“They are changing her character more to be more of a support to him and lift him up so he is the one doing all the ass kicking,” says Durance. “It’s shifted a little bit. “My character is very instrumental in propelling that mythology and bringing about hopefully seeing Superman doing what everyone wants him to do. That’s about all I can say, but he looks good doing it.”

HOW DO YOU WANT SMALLVILLE TO END? WHAT DO YOU WANT TO SEE HAPPEN BEFORE THE SEASON IS OVER? COMMENT BELOW …