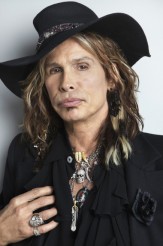 Tyler says about the band: "Even if it was dead, it couldn’t be dead.”

While speaking at today’s Fox Winter TCA tour in Pasadena, CA, singer Steven Tyler who is a judge on this year’s AMERICAN IDOL confirmed that Aerosmith is not dead, even though he’s doing IDOL.

“We’re just on a break,” he admits. “What people don’t know is we did a South American tour. We’re still rocking big time. We have one more album for Sony and we’re working on it at the end of January. We’re starting to write songs. We booked a tour for November and December. Aerosmith is so much bigger than I am. The band isn’t dead. It couldn’t be dead. Even if it was dead, it couldn’t be dead.”

As for what his bandmates think of his new gig, he admits he “got some stuff from the guys.”

“Everybody has their opinion,” says Tyler. “I wanted to test my limitations. If it’s not worth doing, it’s not worth overdoing. I’ve never done television like this. I wanted to see if I could be real. I’ve been doing this for forty years. I’ve been on the road developing my own stuff. I come from the era of you have to blow away the band that [performs] before you. God knows I’ve been judged all my life with what I do. The band has some things to say about it. I am who I am. The band wouldn’t be the band without each member of the band. It will all come out in the wash.”