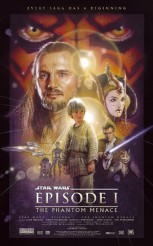 This is the first post-conversion by LucasFilm for the six film saga, with more to follow

Yes, 3D has finally come to a Galaxy far, far away with LucasFilm finally post-converting the first film in his STAR WARS saga into that format.

STAR WARS: EPISODE I – THE PHANTOM MENACE has set the date of February 10, 2012 for this huge event, which will once again introduce a whole new generation to the theatrical experience of this venerable franchise.

I’m sure fans would have preferred the original trilogy to go first, but so be it. It’s STAR WARS. Seeing it on the big screen, in the original order and in 3D will be worth it (regardless of how you feel about EPISODE I).

According the Hollywood Reporter, if this release goes well, LucasFilm is considering release the subsequent films in the saga one year apart as an annual event. That would mean we wouldn’t get to experience THE EMPIRE STRIKES BACK until 2016! Let’s hope they change their mind on that one!