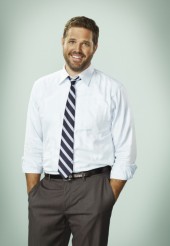 Actor David Denman may have played small parts in very successful shows like THE OFFICE and ANGEL, but he is no shrinking violet. Denman is a bulky 6’4 and finally stretching his acting muscles in the new comedy TRAFFIC LIGHT premiering tonight on Fox.

In Hollywood’s trend of late, the show focuses on three friends at different romantic stages in their lives. Denman, 37, plays the married and content one who struggles to balance his family life, friendships and career. But don’t look for a copy cat version of RULES OF ENGAGEMENT or PERFECT COUPLES. Denman says TRAFFIC LIGHT is similar but different as he takes 5 to talk about his new show. 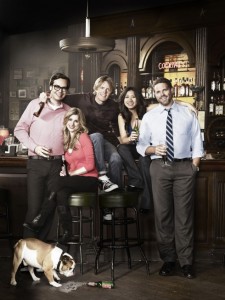 On how his show will stand out from all the rest…
“I did read a bunch of (scripts) during our pilot season, and one of the things that struck me so great about this show was that it did seem so real,” says Denman. “I read this, and these people were so relatable. They were my friends. It was my life. These were people that I know, so that was the reason why I gravitated towards this script as opposed to the other scripts that I had read on paper. I don’t know how those turned out, but this just rang so true.”

On the very free use of improvisation on set.
“There’s a lot of improv in the show,” Denman reveals. “So, it’s incredibly and creatively fulfilling to have the opportunity to have executive producers and writers and directors that allow a workplace like that where we all riff on things, whether it’s suggested by one of the directors or the writer or one of the other actors. You know, a good portion of our show comes with that banter, and we’re genuinely friends off-camera, so a lot of that dynamic makes it easier to play on camera.”

On his time on THE OFFICE playing Roy…
“For THE OFFICE, for me, I had seen the British show,” explains Denman. “A friend of mine had called me and said, ‘Oh, my God, you have to see this show. It’s brilliant. You’ll love it.’ And I called my agent and said, ‘Hey, I’d like to get in on this.’ He literally said, ‘Really? You want to do that?’ And I said, ‘Yeah, I do actually. I think that might be really funny.’ That the tone is different, and I like that it’s different than your typical comedy. So I don’t think any of us thought it would be as big of a success as it was. We all loved it, and we believed in it. I think most of us, except Steve [Carell], had seen the original and were fans of it. That show grew as time went on. I mean, that first season is very different from season two and on. In the first season, we spent a lot of time trying to imitate the other show to some extent. Once it sort of took legs and they started writing for that cast of characters, it all of a sudden got a new life. And honestly, our show, like this is one of the most talented ensembles I’ve ever worked with, and I think as talented, if not more talented, than THE OFFICE in some aspects. The chemistry grew as time went on, and the show got so much better, and they started writing to the strengths of us. I think we have something very special here that I think people will genuinely connect with.”

On the freedom giving to him on THE OFFICE
“There was a subtlety to some of the comedy on THE OFFICE that allowed a landscape for MODERN FAMILY and [TRAFFIC LIGHTS],” says Denman. “For me, it was a huge learning [experience]. I learned so much sitting on that set watching Steve Carell and Rainn Wilson and everybody that was there because they got to play so much. And we did a lot of improv on that show as well, which allowed for a lot of these great magical moments that pop out, and that only really happens when you have the freedom to do that. And we also have the luxury of great executives that allow us to play in that same type of tone, although ours isn’t done like a documentary.” 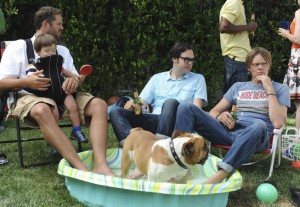 On the title relevance to the show…
“One of the other things that’s a big component of our show is actually sitting in traffic on the phone,” says Denman. “One of the conflicts of our show is that Mike is trying to be the best dad, the best father, the best husband, the best friend and the best employee. So he has so many things he’s trying to be good at. He’s juggling all of it. So to try to carve out a little time to be able to continue those relationships, a lot of it’s done in the car driving to and from work or doing errands and he’s catching up with his buddies. So that’s partially the title. You know, a lot of our time is spent in the car talking and I do that personally. Whenever I’m in the car, I’m talking with friends and stuff on my way to or from work. I play the married guy who is very happy, you know, with where he’s at in life. I’m red. Nelson [Franklin] and Aya [Cash] are just moving in together. They’re yellow. Then Ethan [Kris Marshall], who is the green light, doesn’t necessarily want to settle down.”