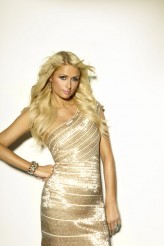 Is the world ready to get inside the head of the REAL Paris Hilton?

Be prepared, the rich blonde has decided enough with tabloid TV chronicling her life, she’s going to do it herself.

At today’s NBC Summer Press Day, Paris Hilton spoke to the press about her new Oxygen reality series THE WORLD ACCORDING TO PARIS (premiering June 1) which opens her life to cameras in a completely different way including a prominent appearance by her heiress mom Kathy Hilton.

“This show is not like anything I’ve ever done,” says Hilton who is also a producer on the show. “On THE SIMPLE LIFE I was playing a character – a fish out of water. Now they will see my real world, my relationships, my friends. It’s not a competition show, it’s just a behind-the-scenes look at my life to see how I really am.”

And how is she really?

“On the other shows, it was me playing a character who I wasn’t,” says Hilton. “[Here you see] the businesswoman I am. How down to earth and sweet I am. I am a great cook. I love my animals. I can’t really describe it.”

“The show is super, super hot.”