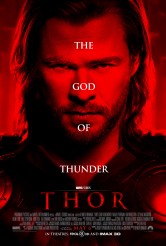 Marvel's God of Thunder arrives May 6

First Paramount released new stills from CAPTAIN AMERICA: THE FIRST AVENGER, and now they’ve released two posters for the new THOR movie from Marvel Studios hitting theaters May 6 which stars Chris Hemsworth as the God of Thunder, Natalie Portman as his love interest and Anthony Hopkins as a his Daddy.

Check out the stills below.