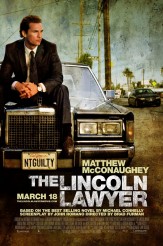 THE LINCOLN LAWYER, adapted from L.A. noir mystery master Michael Connelly’s novel, comes to the screen as a thoroughly enjoyable courtroom drama, with plenty of twists and fake-outs. Although the movie doesn’t get maximum mileage out of the central notion that its protagonist uses the inside of his Lincoln Continental as his law office, director Brad Furman showcases Los Angeles in a knowledgeable way that will gladden the hearts of locals, while letting the choice dialogue of John Romano’s screenplay zip and zing.

Matthew McConaughey plays Mickey Haller, a slick defense attorney who usually has no qualms about whatever his clients may or may not have done. Unlike the law, he assumes pretty much everybody is guilty. His clients are generally folks like prostitutes and bike gang drug dealers, but Mickey’s bail bondsman pal Val (John Leguizamo) tosses a big ticket Mickey’s way – Louis Roulet (Ryan Phillippe), scion of an extremely wealthy family, has been charged with battery and attempted murder. Louis says that he was set up by the alleged victim and her boyfriend to set the stage for a civil suit. Mickey listens, puts his investigator (William H. Macy) on it to see what they can find – and, per the way these things usually go in thrillers, learns that nothing is as it seems and something from his past is rising up to haunt him.

The filmmakers make sure we get around the city, from freeways to suburbia, and there is a threatening ambience, but the bulk of the action is verbal. What’s good here is that the film and the actors get a kick out of the banter and know how to deliver it. McConaughey is well cast as the consummate smart-ass, duplicitously deadpan Mickey, showing us that little delighted thrill of putting one over on his opponents, even if he doesn’t give us quite as much angst as seems intended when the character realizes he may have seriously messed up. Phillippe puts forth enough certainty as the client to get us past a couple of plot questions that were dealt with in Connelly’s novel, but are left a bit fuzzy here.

The supporting cast is excellent. Macy gives his weary gumshoe just the right amount of playful eccentricity, Josh Lucas gives his assistant district attorney a good balance of pomposity and fretfulness (and bears enough physical resemblance to McConaughey to create an intriguing doppelganger vibe in the courtroom) and Bryan Cranston and Michaela Conlin register as two LAPD detectives who begin to wonder exactly whether Mickey himself may be up to no good. Marisa Tomei puts a lot of personality into the underdeveloped role of Mickey’s ex-wife.

THE LINCOLN LAWYER doesn’t get as down and dirty and thoughtful as its source material, but it is consistently entertaining and engaging, knowing how to make us worry, then cheer. Overall, it’s a courtroom victory.