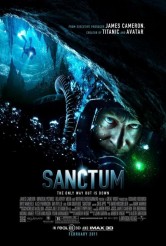 James Cameron, who executive-produced SANCTUM, is famous for his love of diving, and although he did not direct this film, that passion and its cause are evident throughout. We see one breathtaking underwater vista after another, brought to us in uncommonly effective 3D. Most films waste the format – not so SANCTUM. Under Alister Grierson’s direction, we get a wonderful sense of how rock shelves in caves stretch out at a particular distance and we practically get vertigo watching water thunder down deep drops. Indeed, as the film opens and we have one of our few encounters with civilization, a few roof shacks appear to extend out into the theater, roughly two rows in front of the viewer. It’s great.

Then of course the characters start talking and we start weighing the gorgeousness of the visuals against the banality of the words. We pick up very quickly that master cave diver Frank (Richard Roxburgh) and his teenage son Josh (Rhys Wakefield) don’t get along. Frank is in charge of an expedition to see whether a particular underground cave system leads to the ocean, and he’s dragging along an extremely resentful Josh. In addition to Frank’s regular team, other newcomers are Carl (Ioan Gruffudd), the rich American adventurer who is funding the exploration, and Carl’s girlfriend Victoria (Alice Parkinson), who is an expert mountaineer but a novice spelunker.

The already tricky situation turns catastrophic when a sudden storm floods the cave entrance, forcing everyone to seek another way out via the labyrinth of submerged, uncharted caverns.

This is certainly a dramatic situation, and a reasonably plausible one at that (we do get a “based on a true story” at the beginning, albeit we also get one of those all-purpose disclaimers about not being based on any particular individuals at the end). However, the screenplay by John Garvin and Andrew Wight not only hits pretty much every expected note, but does so with such force that some scenes verge on parody.

The dialogue is consistently on the nose, so much so that even realistic slang (the R rating is as much for language as anything else) doesn’t help it sound more lifelike. Added to that a few too many people flipping out at exactly the worst possible moment for everyone else – which is also exactly the right moment the plot needs a crisis to move it along – and the film’s controversial notions of what constitutes a character-building experience in dire straits, and the result is shaky drama.

Despite this, director Grierson manages to make a lot of the sequences pretty harrowing – the movie works well so long as no one’s talking. While nothing is as protracted or intense, squeamish viewers should be warned there are a couple of 127 HOURS-type incidents, plus of course the overall issue of being trapped in underground flooding caves.

Roxburgh is persuasive as a man who knows what he’s doing with caves and diving much more than he does with fatherhood and Wakefield is suitably sensitive as the physically adept youth.

SANCTUM has on its plus side stunning settings and excellent use of the 3D process. As that dimensionality doesn’t go very far with the characters, however, whether this should be seen or not depends entirely on what one values most in the film-going experience.