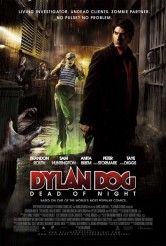 There’s nothing really wrong with DYLAN DOG: DEAD OF NIGHT as far as it goes. Unfortunately, the movie is coming out after about five million TV series and several other film franchises with more or less the same premise. Once the initial specific memory wears off, viewers may find themselves trying to remind which episode of BUFFY featured Brandon Routh as a guest star – or was that TRUE BLOOD or THE VAMPIRE DIARIES?

Routh plays the title character here, a private detective who used to be up to his eyeballs in vampires, werewolves and zombies, but has tried to pull away from that shadowy world. When he’s called in by the lovely Elizabeth (Anite Briem) to investigate her father’s murder by large hairy creature, Dylan’s first instinct is to refuse the case. Then tragedy strikes close to home and Dylan changes his mind. He winds up being chased around New Orleans by various bloodsucking and lycanthropic groups, while he tries to track down an ancient artifact that, in the wrong hands, can bring about the apocalypse.

This is all perfectly fine, though DYLAN DOG has the same issue that plagues a lot of current indie horror, namely the reinvention of a horror/comedy subgenre wheel that started rolling at speed quite awhile back. The quips are decent, if hit a little hard, but the creatures look like what we’ve come to expect on TV series that traffic in these sorts of plots.

The basic premise in DYLAN DOG – that Dylan is a human who mediates arguments between the various supernatural clans – has a lot of potential that gets shoved to one side in favor of a plot that seems like an episode of any of several programs that the filmmakers not have watched but many viewers will have encountered. Those familiar with the American edition of BEING HUMAN in particular may find themselves having flashbacks in terms of the character played by Sam Huntington, a regular on that show, as the attitude is very similar, even though his Marcus in DYLAN DOG is subject to a different supernatural affliction.

Kevin Munroe’s direction keeps the pace rolling along, though there are few high or low points. Routh is a personable lead, albeit he’s better with the smartass stuff than the angst – but the same can be said of the script by Thomas Dean Donnelly & Joshua Oppenheimer, working from the graphic novels by Tiziano Sclavi. The good actors playing the various kinds of monsters are having a lot of fun with what they’re doing – if a movie has got to have a hip, ambitious vampire overlord, Taye Diggs is fine casting. Peter Stormare may chew the scenery a little as a werewolf boss, but then, werewolf bosses are supposed to chew things, so it works out.

Exclusive ARROW Photos of the cast and crew from the CW Night at the P...
STALKER creator Kevin Williamson on his new CBS series - Exclusive Int...
TV Review: CONSTANTINE – Season 1 – “Non Est Asylum” – Series Premiere
SYLVIA! Exclusive Photos from the premiere of the Henry Jaglom and The...