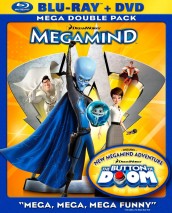 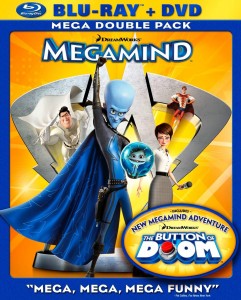 MEGAMIND – There is something about today’s animated films that are a breath of fresh air among the Hollywood schlock that keeps being churned out. Maybe it is because they go beyond just being a remake or a sequel or just some comic book adaptation or superhero reboot. Here again, an animated film proves it is above and beyond as MEGAMIND is a hell of a lot of fun. Will Ferrell stars as Megamind, an evil genius that finally defeats his long-time nemesis Metro Man (voiced by Brad Pitt). But victory is anything but sweet as he discovers that the fighting was half the fun of being a villain and everything now is just way too easy. So he goes about making his own heroes, falling in love and rethinking this whole evil thing. The Blu-ray version includes a host of stuff that can be played alongside the film such as trivia, behind-the-scenes featurettes, interviews and more.

ALL-STAR SUPERMAN – Speaking of good animated pictures, ALL-STAR SUPERMAN takes a cue from the comics of the same names in this original movie from Warner Home Video about Lex Luthor poisoning Superman with a huge dose of radiation. With weeks to live, Clark Kent reveals his secret to Lois Lane but must still try to stop Luthor from his plans to take over the Earth. Some good animated battles ensue and the entire thing is pretty darn emotional which is a good thing when talking about a animation film.

MEMENTO – Christopher Nolan may be one of the biggest directors in Hollywood because of INCEPTION and THE DARK KNIGHT, but his first film is arguably his best. MEMENTO is just a great film about a trouble young man that loses his memory every day and is desperately trying to find the person that killed his wife and stole his ability to make new memories. So as a makeshift solution, Leonard (Guy Pearce) tattoos himself with knowledge of his past, along with photographs, notes and more about the killer and himself. Told in ten minute segments that are in reverse order, it is a unique story that set the stage for many directors and creators to copy this style. This is the first time the film is on Blu-ray and includes a new “Remembering Memento” – a 10 year anniversary retrospective – and the legacy special features from the original DVD release.

PSYCH 9 – Ghost House Underground has returned with two new titles … in the past they really put out some quality films such as THE CHILDREN, which is just a terrible movie (in a good way) because parents are forced to kill their kids, and OFFSPRING, about a cannibal tribe that roams the coast and raiding local villages. Unfortunately, PSYCH 9 is not even close to this as it begins as a haunted hospital flick and morphs into the woes of a young woman that was horribly abused by her father. There are no scares or fun here, just frustration as it hops back and forth between a ghost film and a childhood abuse drama.

STAG NIGHT – The other Ghost House Underground title is the story of a group of friends that go to a strip joint and on their way home get friendly with some chicks on a subway. However, one of the guys is a complete douche and as a result they all get off the train at a point in the track where there is little life. However, they are far from wrong as they stumble across three cannibal homeless people who kill a cop and then one-by-one kill the unfortunate people off. While some of the gore is pretty good, the story is milquetoast and it lacks any scares whatsoever. 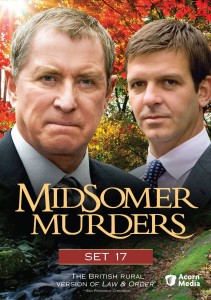 MIDSOMER MURDERS – SET 17 – Another great set of episodes from this classic show that is the LAW AND ORDER of British television. This great set includes the following episodes: “The Dogleg Murders” – about swanky golfers turning up dead on the 13th hole; “The Black Book” – A local art auction has some sort of ties to a string of murders; “Secrets and Spies” – about something killing sheep in Midsomer but moves to larger pretty; and “The Glitch” – about a scientist and his attempt to stop a business venture that turns deadly.

WEEDS – SEASON SIX – Another season about selling pot and keeping up with the soccer season for her children. All 13 episodes are included on three discs in this sixth season that is offered both on DVD and Blu-ray. There are audio commentaries and featurettes with the cast and crew as well as a gag reel and behind-the-scenes feature.

NURSE JACKIE – SEASON TWO – Edie Falco returns as Jackie, the deeply flawed emergency room nurse that has more than a few skeletons in the closet. As a functioning addict, a wife and nurse, we follow the exploits of her in this 12 episode set that includes two featurettes, deleted scenes and more.

ICE ROAD TRUCKERS – THE COMPLETE SEASON FOUR – While this series looks pretty good on DVD, it really shines on Blu-ray where the whole environment comes to life as does the drama of these truckers that have to haul all sorts of supplies to remote towns in the great white north. The show follows in the same vein as THE DEADLIEST CATCH as the tension is always high but the payoff could be just as high if they can deliver the goods quickly without ruining their vehicle.