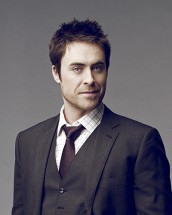 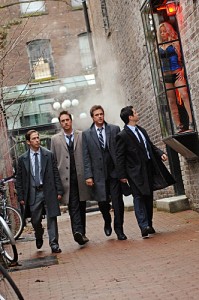 CBS’s new series CHAOS, premiering tonight at 8 PM, is a comedy/drama about a team of CIA spies, fighting both terrorists and bureaucracy. The title refers not only to the general conditions under which the team works, but also to the acronym for their unit, Clandestine Administration and Oversight Services.

Murray talks about what both he and his character are doing in the U.S., action figures and more.

ASSIGNMENT X: Your CHAOS character Billy Collins was formerly with the British Secret Service.  Why is he in America, working with the CIA?

JAMES MURRAY: My character wound up coming to fight for the CIA. All we know, and all [series creator/executive producer] Tom Spezialy indeed will tell me, is that he’s not allowed back in the U.K. There’s a little snippet in the pilot where we find out he’s kicked out of MI-5. Maybe something to do with another female agent, which is touched upon in the future, but there’s something going on there that we don’t quite know. Let’s put it this way. If I’d stayed in the UK, I’m sure officially I probably would be allowed to, but I think the MI-5 would make it very difficult, possibly lethal, for me to stay in the UK. So I’m much better housed in the CIA, to put my skills to use there. So there’s a little bit of a love/hate relationship that the character has with the UK.

AX: Did you leave PRIMEVAL or did you come over here when it looked like PRIMEVAL might not be picked up for another season?

MURRAY: I left PRIMEVAL when my option was up. I mean, I loved PRIMEVAL, but ultimately, it wasn’t hugely rewarding after two years. I think it’s a great show and I loved my time on it, but the CGI element and the dinosaur-led element of the show was ultimately, after a couple of years as an actor, you feel there’s not much more you can offer.

AX: Working with CGI dinosaurs often involves on-set playing opposite a tennis ball on a stick …

MURRAY: Right. And when my option expired, I thought, as much as I enjoyed myself and learned from that experience, it was time to move on.

AX: Are you excited by the things that are physically on set in CHAOS, like the cars and tanks and so on?

MURRAY: Yeah, you are. As I said, it’s hard work, that [PRIMEVAL] stuff, because it’s all reactive and there’s nothing to work off, apart from a tennis ball on a stick, which later becomes a T-Rex. There are only, I would say, probably a dozen ways to look shocked, react and scared, before you realize that you’re going over the same old ground and it’s time for a change [laughs].

AX: Was there a reason you specifically decided to come to the U.S.?

MURRAY: I think I read somewhere recently that we [British actors] are very cheap and very grateful, at least to start off with, and that’s why we get cast, because I think that’s what happens. And I think the American market is very open and a lot more broad-minded perhaps. They set the standard and I think they realize perhaps that we’re perfectly capable. I think it must upset, quite rightly, a lot of American actors when they see British guys potentially taking their roles, but in my case, I hope that ‘s not true, because I’m not playing an American. So I hope I don’t get all sorts of stuff sent through the letters by out of work American actors.

AX: In real life, you’re English. Why was the choice made for Billy to be Scottish?

MURRAY: One of Billy’s strengths is, he’s very articulate and he enjoys his words, he’s a wordsmith, he’s a Shavian, and I think the Scottish accent lends itself much better to his almost poetic words. It’s a little more singsong, it’s a little bit more interesting, it’s a little bit more exotic. I think from my point of view, that’s where it comes from. You’d have to ask Tom – I guess he’s a huge lover of Scottish things, I think he’s a huge [Sean] Connery fan and I think he thinks that all this entertainment spy movement in films and TV, at least, came probably originally from Ian Fleming and James Bond and that movement. And of course, Sean Connery is Scottish, which is why I think we have that little moment in the pilot.

MURRAY: I would say, his exotic charm, if that’s the right phrase, keeps them together, stops the bickering. Sometimes when they’re in a slightly foreign surrounding, whether it be North Korea or Bolivia, he will break the ice and I think that he has an inherent charm, which is very useful and he’s the joker and he looks after Freddy’s [Rodriuez] character Rick as the season unfolds, kind of big-brothers him a little bit. So he’s the comedic linchpin, I guess.

AX: You were on the English soap opera CORONATION STREET …

MURRAY: Many years ago. The character was called either Sandy or Randy. I really can’t remember. He was definitely randy in nature, but I literally had like four or five episodes. That was my first-ever job and it was frightening going into that.

AX: They made an action figure of your PRIMEVAL character. Do you have any of them?

MURRAY: I use one as a doorstop. Its leg is a perfect fit under one of the doors in my house at home, so it keeps the door ajar perfectly. I’d love to tell you it’s on my mantelpiece and it’s taken pride of place, but it is after all just a plastic figurine. It’s doing a job, it’s serving a purpose.

AX: On screen, it stops dinosaurs, at home it stops doors …

MURRAY: You just get rid of some of the syllables in “dinosaurs” and you get “doors.”

AX: If you have kids in your life, that could be cool – they’ll see you fighting dinosaurs onscreen and have an action figure of you.

MURRAY: Yeah. I have a daughter now who is fifteen months actually. She’s a little baby. And hopefully someday, she’ll see tapes of her dad fighting international terrorists, and maybe those two dolls can play in peace and harmony – or fight each other. Who knows?

AX: Anything else we should know about CHAOS?

MURRAY: I think it’s a fantastic show and long may it continue to be, and thank God for Tom Speziali, who’s a great voice and a great writer.