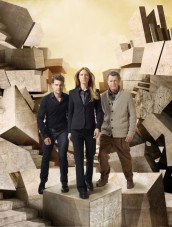 No big spoilers, but some teases about what to expect storytelling-wise 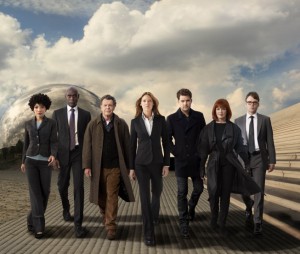 With FRINGE heading into Season 4, ASSIGNMENT X recently spoke with executive producer J.H. Wyman about what to expect with the series return (it premieres tonight on Fox). Thankfully, he doesn’t offer any huge spoilers, but hinted at the direction the series will be going in with the absence of now non-existent Peter (Joshua Jackson) weighing heavily on Walter (John Noble) and Olivia (Anna Torv) as they continue to explore Fringe science (both Over Here and Over There).

Here’s what he had to say.

ASSIGNMENT X: It’s a given that Peter will be back, correct?

AX: Do you think this paints you into a corner at all?

WYMAN: What you call a corner, we call an opening, mate. It’s not a corner. We don’t start a season unless we know where we’re going. I have a complete amount of respect for people who can wing it on the go, but that’s just not us. Jeff and I both like to knock out everything before we go. We knew where we were going even at the end of the season 1 – we knew everything.

AX: A lot has been written about the move to Friday nights last year – have you been satisfied with the move as a producer?

WYMAN: Here’s the thing – usually the networks and studio keeps you in the dark. If your show is doing well, then you’re usually okay. If your show is a fan favorite in a small niche market, you’re always widening where we stand.  In this case, Fox has been so forward with us about information and so transparent. When we moved from Tuesday, they told us exactly why we were moving and what the business plan was and how we fit into that. We knew that on Thursday we’d take a hit on numbers, and the same thing when we moved to Friday. We did what we needed to do on Thursday for them, we went to Friday and Friday is where we live and our fans followed us. We didn’t think we were cancelled at all. They expressed to us where we were going and why.

AX: It’s a great night for the show though.

WYMAN: In general, appointment TV is hard people. People have busy lives. When I was a kid growing up in my house, we would sit around the TV set and it would be a family sort of experience. There’s a breakdown of an American family. Now it’s not like that. People are divorced, families are running from one thing to next. It’s a hard to find that time. People are working really hard in their lives. I just want to relax and watch the show when I want to watch the show which is what Tivo allows. We’re fortunate we have such a rapid fanbase. We love our fans. They’re committed to us and we’re committed to them. So far, so good. 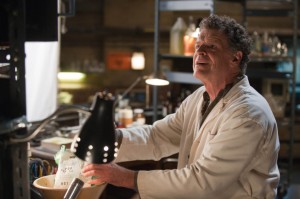 AX: It’s a given the alternate universe will continue this season, correct?

WYMAN: We’ll keep that. That’s the language with the show moving forward.  The two universes was a big a risk for us. It was about “how do we do this – one over here, and then over there?” So we decided to dedicate whole episodes [to each individual universe] because we believe we had such a compelling mythology that “Over There,” people would get involved and find it as interesting as we did. We had to invite them and let them stay there and let them emote and feel something. It’s a big language of our show now, going forward. We are investigating these two universes, the people in it, their lives and the choices they’ve made.

AX: It must be fun to explore two different sides of each character?

WYMAN: That’s half the fun to demonstrate the major themes of the program and show what you would be doing on the other side. It’s always interesting and really fun to write and get into that intricacies. Nobody is ever really dead on FRINGE. You can bring people back and that’s what’s so great about the program. FRINGE science is amazing – you just don’t know. I can tell you, you will probably get visits from the past and also new characters in the future. 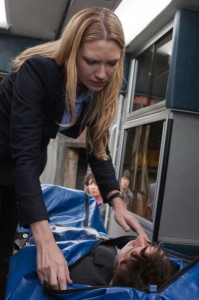 AX: Will Olivia have more control of her powers this season?

WYMAN: Every season, what we try to do is close the season with an opening of a new chapter. What I can promise is it’s something you won’t expect and something you will learn about. We try not to pick up things and drop them. We pick them up. We may leave them for a minute and come back , but you’ll always get your answers, because we’re interested in answers as well.

AX: Will there be the same mixture of standalones and mythology episodes?

WYMAN: The mythology is a big part of all these episodes. What I loved about THE X-FILES and why I was a huge fan, was because, it always had a central question like “is the truth out there.” Everyone either believes or they don’t and they switched some items. If you stop Mulder at any place in the series in the standalones and said to his charatcer “what are you doing here?” he would say “well I’m looking for my sister.” You knew that was going on in his mind and his main goal. For FRINGE it’s a more of a challenge. It’s altogether different. We do what we coined as “myth-alones.” We can tell stories that are standalones and also inform the characters and have a bit of mythology in it as well. “White Tulip” is a perfect example. I wrote it with a very specific theme in mind to tell a certain story and address what Walter and Peter were going through. It rewards the long-term fan, but the new viewer can watch a compelling hour of television.