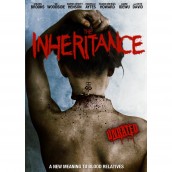 On a horror level, THE INHERITANCE is okay if unexceptional – characters who are a bit slow on the uptake get into more and more dire straits. On a meta level, though, the movie is perhaps weirder than it intends to be. With its prologue and mythology set in the pre-Civil War South, THE INHERITANCE manages to suggest that actual evil was involved in ending slavery, not exactly a message that resonates, no matter how unreal the context.

A wordless prologue set in the pre-Civil War South shows us images of black slaves, some lynched, some beaten bloody and being tended to by family members. Then we see a family tree introducing the characters that we’re about to meet. Although unrelated by actual blood, responsible Anna (Golden Brooks), her secret boyfriend ex-fighter Henry (D.B. Woodside), and cash-strapped Tyrone (Darrin Dewitt Henson), Simpson (Shawn Michael Howard) and Lily (Rochelle Aytes) are from five families that have grown and prospered together since the days of the Civil War.

Summoned by “the elders” – i.e., their grandparents – the representatives of the younger generation all have their own reasons for attending this snow-covered family reunion out in the middle of nowhere. Then things begin going bump in the night, ominous bloody words are scrawled on windows and Uncle Melvin (Keith David) tells a bedtime story not designed to help anybody get to sleep.

The audience isn’t too far ahead of the characters as to what’s going on here, primarily because writer/director Robert O’Hara has someone spell it out. African mythology has the potential to be majestically scary, and O’Hara scores with casting the impressively physical Lanre Idewu as the embodiment of this, but the filmmaker sometimes misses the mark and veers into camp. The whole deal-with-evil-to-get-out-of-slavery business brings up a lot of questions that the film never attempts to answer, including if everyone’s ancestors had been virtuous, would they have remained slaves? How did everybody who didn’t make this deal attain freedom, within the context of the movie’s storytelling? Then again, this is a film that asserts, apparently non-satirically, that lesbianism is more or less the same thing as virginity (which will come as news to both lesbians and virgins alike). Material like this can make a viewer less worried about what’s lurking in the shadows than what gonzo plot element may leap out next.

Even so, O’Hara manages some good moments of creepiness and apprehension, as well as some creditable Fangoria fodder. He’s also assembled a good cast. David in showman mode is always fun to watch, and Brooks conducts herself with steely integrity as the most sensible of the imperiled family members.

THE INHERITANCE admittedly puts a new spin on an old plot – it’s just that this particular twist on the one about dangerous old family secrets brings up many more issues than the text or tone can handle effectively.