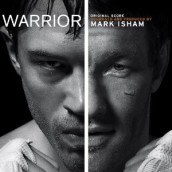 Having scored the inspirational hockey drama MIRACLE and the downbeat cop conspiracy PRIDE AND GLORY for writer-director Gavin O’Connor, Mark Isham’s third step into the ring with the filmmaker combines both the grim and victorious. And the result is a musical WARRIOR that grabs you with surprising subtlety before delivering a knockout foot to the face (this is mixed martial arts after all).

For a good while, Isham keeps his drama in a brooding key, full of the fighting brothers’ family resentments and recriminations. But emotion steadily rises to break through the orchestral ice, his heavy strings and brass steadily gaining their soul with sense of mythic importance, not to mention a heavy dose of percussive force as Isham approaches the big mano-a-mano. You can imagine gladiators going out to their noble doom to similar strains, which is exactly the point here, albeit with a happier, if not exactly fist pump-to the sky ending. But if there’s one particularly neat bit of music for the characters’ inevitably heroic rise, then it’s Isham’s brilliant use of Beethoven’s “Ode to Joy” in an extended montage scene, a left classical hook that comes out of nowhere to do push-ups with Isham’s own steadily exhalant rhythms.