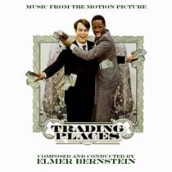 An old fogey named Elmer Bernstein became the new (and perhaps unwitting) king of youth comedy scores when filmmaker John Landis had the idea that the composer’s straight-laced, old Hollywood approach would be ideal to play the classically pompous academia who did their best to make sure Faber College had no fun of any kind. The keg smash of 1978’s ANIMAL HOUSE made Bernstein into The Man in more ways than one, tuning his often brassy approach to the height of wealth-spoofing irony- an approach that would pay huge dividends for both men ten years later with TRADING PLACES.

Of their five subsequent pictures together, 1987’s TRADING PLACES best allowed Bernstein to wade in his snooty sound, pulling out an Original Score Oscar nomination that’s so far stood as the only recognition one of Landis’ films has gotten from the Academy snobs. With their nod also encompassing musical adaptation it’s easy to see how Bernstein was accepted into their private club by lavishly decorating two of Wall Street’s most infamous 1per-cent’ing brothers with the delicious faux elegant spirit of Rossini and Elgar, while also seamlessly incorporating the real classical deal into his music with Mozart’s “Marriage of Figaro.”

This robber-baron pomp and circumstance gives way to Bernstein’s own, inimitably lush symphonic style for the brash spirit of Eddie Murphy and Dan Aykroyd, whose can-do determination exacts revenge on Duke & Duke with patriotic fife and drum marches, a romping western-style orchestra and an overall, undeniable sweetness that made TRADING PLACES its millions.

La La Land gives us the whole of Bernstein’s score, while also offering a wealth of source music, from the composer’s own rocking blues and Jamaican kettle drums to a number of Christmas chestnuts that capture the duplicitous height of joy for the film’s prince and the pauper switch.

Giving  PLACES‘ limited edition added value are Jeff Bond’s liner notes, which feature a fun recounting of the movie’s production (including a priceless tidbit about an old star way too classy to say the F bomb), as well as new interviews with Landis and Peter Bernstein, who ruminate on the composer with a comedic Midas touch.