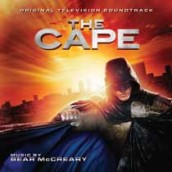 Between a starlost spacecraft, homegrown mad science, killer robots and the shambling undead, Bear McCreary is rapidly becoming the king of genre television scoring- particularly the non-super superhero. After his adventurous symphonic scores for Fox’s adaptation of DC’s identity-shifting HUMAN TARGET, McCreary employed the orchestra to even more innovative effect for NBC’s THE CAPE.

While not based on any comic book per se, what gave this billowing avenger distinction beyond a Batman-esque shtick was his Toreador-worthy use of the titular clothing article, as handed to him by a not-so-bad circus of crime. While THE CAPE’s promising premise ultimately slipped under the weight of its goofy pretentiousness, McCreary’s music kept a far more even keel at balancing the good guy’s muscular symphonic needs with the ethnic eccentricity of his creation.

Blanketing his episodic soundtracks with the righteous fury of a stand-out main theme, McCreary energetically brings in the battery of percussive instruments that served him so well on BATTLESTAR GALACTICA, here embodying THE CAPE‘s freakshow gallery of friends and foes. It’s a delightfully oddball ensemble that includes guitars, accordions, harpsichords, a hurdy-gurdy, Latin rhythms, Jewish jigs and every other musical eccentricity that McCreary could throw into the mix, suites that are thoroughly engaging through the course of two action-filled CD’s.

Tying them all together is McCreary’s winning geek love of the muscular Shirley Walker action that filled her TV superhero scores for BATMAN: THE ANIMATED SERIES and THE FLASH (both also released by La La Land), a composer to whom McCreary makes a worthy dedication of THE CAPE‘s music to in far more than name. For like Walker, McCreary has cut his music from a strong melodic cloth worthy of the big screen, a seamless weave of serious and tongue-in-cheek energy that never fails to excite, or evoke emotion as it crusades between the honorable and the just-plain wacky ten-issue span of THE CAPE.

Clink on the link to buy THE CAPE soundtrack