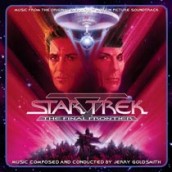 La La Land continues to show long-needed love to great soundtracks from undeservedly maligned sequels, in this case the one where William Shatner assumed both the com, and the director’s chair to have the Enterprise find the all-mighty.

Though a lot of this EST-centric probing ended up having its share of goofy moments, the film more often than not did a powerful job of returning the series to its metaphoric sci-fi roots. So it only seemed right for Shatner to have composer Jerry Goldsmith come back to the series for the first time since THE MOTION PICTURE, making this FINAL FRONTIER the second of six TREKs he’d take.

While there’s nothing on the organ and blaster beam scale of Vejur here, TREK V’s mind-meld of orchestra and electronics does a similarly majestic job of exploring the headspace of the holy trinity as they travel to a seeming Shangri-la. Though battle percussion and barbaric statements of The Klingon theme are here to be had in spades,

Goldsmith spends much of this TREK reflecting on the ultimate with a pensive, soaring motiff, his lush, biblical orchestrations and eerie synths making this a hallmark score from a particular, stylistic period that fans of the composer’s INNERSPACE, LEVIATHAN and TOTAL RECALL scores will appreciate.

And be it a person’s insides, a sunken wreck or a Martian air machine, few composers better conveyed the swirling, symphonic majesty of confronting some unknowable force. It works wonders for the film’s unfortunate, under-budgeted special effects, music which makes the final confrontation with a Moses-looking wannabe into some of Goldsmith’s finest genre writing.

As always, it’s our love for the crew that has ensured CLASSIC TREK eternity, an emotional gentleness that FRONTIER’s infinitely versatile theme also does a moving job of conveying. While Goldsmith had ordered the original TREK V album into a punchy listen, what’s included on this special La La Land edition for the first time is his entire score, revealing a true cosmic design to the FINAL FRONTIER that will likely elevate the score, and the film itself several notches in fans’ minds. TREK V’s two-disc set also contains alternate cues, space bar source, and Hiroshima’s new-agey song for Uhura’s fan dance- a particular Katra I’m still trying to get out of my head.