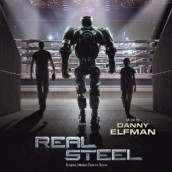 If there was one film whose high concept promised a TKO, then it was having the director of the disastrous PINK PANTHER redo make the movie version of the old Hasbro toy Rock ‘Em Sock ‘Em Robots- as channeled through the father-son corniness of THE CHAMP. But like its junkyard automaton, REAL STEEL shouldn’t have been counted out, as this Hugh Jackman effects vehicle has not only proven to be one of this year’s most entertaining box office winners, but has also delivered a truly unique Danny Elfman genre score that’s all about the musical rope-a-dope as opposed to a flurry of punches.

Don’t expect Elfman’s enraged approach to HELLBOY 2 here, let alone THE INCREDIBLE HULK, as the composer envisions these behemoths with NASCAR-ready country-western-rock. And that turns out to be just the right, inspired choice for a dad driving his ‘bot from one American rust bowl to the other. While STEEL starts off with raw, strumming simplicity, Elfman gradually brings in his more recognizable strings lines, heavenly choirs (with a particularly angelic voice provided by Poe) and fighting mad orchestra, with thumping, metal grunge leading to the big moment in the robot ring.

In any Hollywood music fight where an underdog’s pitted against a pulverizing heavyweight, a composer’s going to be punching back for all he’s thematically worth with those big, Americana roundhouses that practically cry “Adrian!” Elfman fits very well into those Bill Conti shoes to pull out the expected stops in the “Final Round” providing a rousing emotional count for the film’s nicely fleshed-out human characters. It’s about as sentimental an ending that Elfman’s delivered for one of these visually spectacular vehicles, delivering adrenalin and emotion that puts true heart into REAL STEEL.