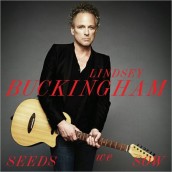 An exceptional set of great, ambient pop songs from one of Fleetwood Mac’s most influential musical architects

When Lindsey Buckingham joined Fleetwood Mac in 1974 (with Stevie Nicks), the end result was a transformation of a rock solid band into a pop music powerhouse.

Buckingham was an expert and visionary musical architect who had a vision that not even the band probably fully grasped at the time and his contributions resulted in some of the finest pop songs ever (I defy you no to start singing along to “Go Your Own Way” when it comes on the radio).

While Buckingham still tours with Mac, the band hasn’t released a new album since 2002, but Buckingham has been very busy as a solo artist releasing the great acoustically textured UNDER THE SKIN in 2006 and followed by the more rocking GIFT OF SCREWS in 2008.

Now, Buckingham returns with his latest solo release, the exceptional SEEDS WE SOW which lands stylistically between his last two solo releases.

It’s a showcase for his incredibly nimble guitar work and his crystalline vocals. The songs, as always, are as catchy as ever and cover a broad spectrum of relationship highs and lows.

The balance between soft, introspective songs like “Seeds We Sow” and “Stars Are Crazy” give way to full-blown pop treatments as on “That’s the Way Love Goes” and “Illumination”

Lyrically, Buckingham is quite playful on this set of tunes. “Seeds We Sow” has the line “Sweet things pretty things are dying/In the penny arcade of Edgar Allan Poe” while “One Take” deals with bad celebrity behavior commenting, “No I have no reputation and I’m not on any list/That’s because I’ve got a publicist who covers up the avarice of where I put my fist.”

Stand-out tracks include the beautiful “Rock Away Blind” which begins with an elegant guitar picking intro and then builds into a crescendo complemented by Buckingham’s soulful vocals. Like the best of his work, the song is filled with beautiful nuances and continues to build and grow until the song shifts gears into an incredible guitar solo toward the song’s end.

“In Our Own Time” also mixes acoustic guitar with a propulsive beat about a love that still bubbling beneath the surface. It also contains the wonderful line: “ I had the same old dream she was hiding outside my door/She used to come from time to time but not anymore.”

“When She Comes Down” is a mid-tempo gem that evokes “Down on Rodeo” from Buckingham’s UNDER THE SKIN.

And “Gone Too Far” is just a great pop song about the end of a relationship – as good as anything he’s done solo or with Fleetwood Mac.

On first listen SEEDS WE SOW feels like it’s relying on too many slow or mid-tempo songs, but on repeated listens, you start realize how expertly placed each song is on this album. Buckingham has always been a stickler for sequencing (you can see that evidenced in the Mac days that even with three different singer/songwriters sharing the spotlight, there was always a cohesive whole to each album) and here there is a flow and mood he’s expertly created with care and tact.

Music nowadays rarely offers these kind of rewards, where new textures or appreciation for music arises out of digging deep into the music. Part of this comes from Buckingham’s unique voice which soulful, bright and powerful and his supreme guitar skills. Both enhance and complement all of the songs on this release.

SEEDS WE SOW ends with the beautiful “She Smiles Sweetly” – a cover of the little heard 1960s Rolling Stones song. And dare I saw, this is a case where Buckingham does it more justice than the Stones originally did. Buckingham recorded this song on a previously unreleased version of his GIFT OF SCREWS album. It’s similar, but this time it’s been stripped down to just Buckingham and his acoustic guitar. It’s incredible, and if you didn’t know it was  a Stones tune, you would swear Buckingham wrote it himself because he truly makes it his own.

For die-hard Buckingham fans (like myself), there are handful of B-sides/bonus tracks also available for SEEDS WE SOW.

Perhaps the best of the bunch is “Sleeping Around the Corner” which is only available on the iTunes download of SEEDS WE SOW (you can purchase it separately as well).

This is a pretty awesome track which feels like TUSK era Fleetwood Mac with its crunchy guitar sounds. It’s listed as the “electric” version, so there must be an acoustic version of this floating around as well. It will be interesting to see if this track resurfaces for a future Mac album or not. It’s a shame Buckingham didn’t feel it worthy of inclusion in the actual sequencing of the album, but I’m sure there are many reasons.

The Amazon.com download exclusives (which also can be purchased separately) include an electric version of “Seeds We Sow” which rocks a lot more, but somehow loses the intimacy of the softer, finished version. Similarly, the acoustic version of “End of Time” is not as powerful as the more produced version on the actual album.

It’s interesting to listen to Buckingham deconstruct his songs, and in some cases bring a completely different feel and sonic palette to the same music. It’s a testament to his perfection nature – and it’s nice that he’s allowing fans a glimpse into the process with these bonus tracks.

SEEDS WE SOW is one of the best albums of 2011. Buckingham is still at the top of his game, and instead of the long wait in between solo releases (like it was in the 1980s and 1990s), he’s pushing forward at a much faster pace with music that is just as good, if not better than when he first made his mark with Mac in the 1970s.

Click on Link: CD Review of Stevie Nicks – IN YOUR DREAMS

Tags: End of Time, Fleetwood Mac, Gift of Screws, Go Your Own Way, Gone Too Far, Illumination, In Our Own Time, Lindsey Buckingham, One Take, Rock Away Blind, Rolling Stones, Seeds We Sow, She Smiled Sweetly, Stars Are Crazy, Stevie Nicks, That’s The Way Love Goes, Under the Skin, When She Comes Down