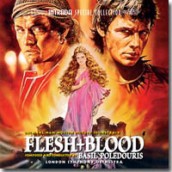 Basil Poledouris was at the height of his macho musical glory in 1985 with the likes of CONAN and RED DAWN, so it was no wonder that violence and sex-loving Dutch director Paul Verhoeven sought him out to score his first English language outing.

More in the exotic period spirit of Miklos Rozsa’s EL CID than the Prokofiev chorals that fueled the ALEXANDER NEVSKY-like fury of CONAN, Poledouris atmospheric score is more about the joys of pillaging than its price, a fun, even tender lyricism that served as an ironic counterpoint to Verhoeven’s onscreen shock value.

FLESH would also offer two of Poledouris’ best battle cues with the rollicking “Arnolfini Assault” and the triumphant castle-bashing of “The Box,” a cue whose clanging metal would presage Poledouris’ approach for his far next, and far more commercially successful teaming with Verhoeven on 1987’s ROBOCOP. Yet FLESH + BLOOD has always been a cult item as a film and score, entailing two previous issues by Varese and Prometheus. Now Intrada allows Poledouris’ heroic sweep to rampage like never before by offering the soundtrack’s complete cues and album versions, as pulled from the original masters. As rousingly performed by the London Symphony Orchestra, BLOOD’s high-spirited swordplay cements the sorely-missed Poledouris as one of the great, modern musical epic-makers to grace the costume genre, especially when said warrior he was scoring was splattered in blood and holding a naked vixen.