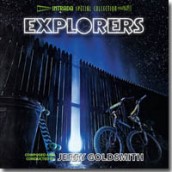 In a legendary career filled with long-standing relationships with such directors as Franklin J. Schaffner (PLANET OF THE APES) David Anspaugh (RUDY) and Curtis Hanson (L.A. CONFIDENTIAL), perhaps no filmmaker brought out the child-like glee of Jerry Goldsmith’s music like Joe Dante- even if some of the nine pictures they’d do together exhibited a deliciously twisted streak of black humor when it came to putting youths in peril from GREMLINS or SMALL SOLDIERS. Yet there’d be nothing but innocence in 1985’s EXPLORERS, Dante’s guileless movie in which a bunch of youths (including River Phoenix and Ethan Hawke) build a spaceship in their back yard. Goldsmith seamlessly became one of the gang with his always-amazing thematic construction, capturing their youthful optimism with a majestic, space-faring score that was just about on the order of the more “mature” sci-fi music he’d do for his STAR TREK score. The difference here is that EXPLORERS is also filled with the kind of playful charm that turns heroes and aliens alike into kids being handed the keys to their parent’s awesome spacecraft.

While the Spielberg-worthy magic of EXPLORERS’ music captures the grand mysteries of what every kid likely imagines about first contact, the movie’s punch line is that said bug-eyed aliens also turn out to be more TV-addicted than the kids they’ve sent their clarion call out to. It’s an ultimate reveal that gives Goldsmith the carte blanche to veer from team spirit to the symphonic adventure of boldly going before ending up with the electronic mischief of what they’ll actually discover.

For a composer given to his own experiments in pushing musical boundaries, EXPLORERS sings with Goldsmith’s delight in synths, here turned into the bleeps, bloops and playfully creepy atmospheres of adolescent E.T.’s, who are given an outrightly goofy theme that seems constructed out of alien farts and raspberries. It’s the kind of absurdity that distinguished even Goldsmith and Dante’s darker efforts together. Yet EXPLORERS’ musical humor that doesn’t blunt its sense of emotional earnestness and fantastical wish fulfillment that’s deservedly turned the film into a cult item.

Previously put out on LP, then CD in truncated form, Intrada has finally allowed Goldsmith’s score to return from the collector’s stratosphere as an unlimited, complete 78 minute edition. And fans couldn’t hope for a better-sounding presentation of this Goldsmith Grail, music that even includes a delightfully satiric “Space Movie” from score orchestrator, and original TREK composer Alexander Courage himself, along with always-stellar liner notes by Jeff Bond. Given its full glory, EXPLORERS now ranks among Goldsmith’s best scores, not to mention one of his most magical at playing everyone’s dreams of taking off for the stars.