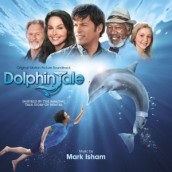 Mark Isham is one composer who knows his way around the animal kingdom, from capturing the joyous flapping of Canadian geese in FLY AWAY HOME to the victorious gait of a talking zebra in RACING STRIPES and the never-say-freeze spirit of EIGHT BELOW’s abandoned huskies. The fact that Isham’s very first score accompanied the plaintive howls of NEVER CRY WOLF, as heard by star Charles Martin Smith, makes it a welcome homecoming that the composer’s now swimming about the Smith-directed DOLPHIN TALE.

While there are the playful cutes to be had at points, this TALE isn’t exactly bounding about like FLIPPER. DOLPHIN TALE might just be Isham’s most emotional take on our animal buddies, as one of its most friendly and intelligent members loses her tail straight out of the ocean, and into an aquarium’s tank.

Isham’s lyrical, at times achingly poignant work is as much about Winter’s human handlers as the dolphin herself. All are on a journey to mental and physical recovery, and Isham’s deeply felt, spiritual music doesn’t so much play like an “animal” picture as it does like one of his sports scores for INVINCIBLE and MIRACLE, where an aching orchestra tracks an underdog evolving into a winner, with all musical points leading to that joyous finish. That Winter makes her touchdown pass with a new flipper only adds to this moving score, and film.